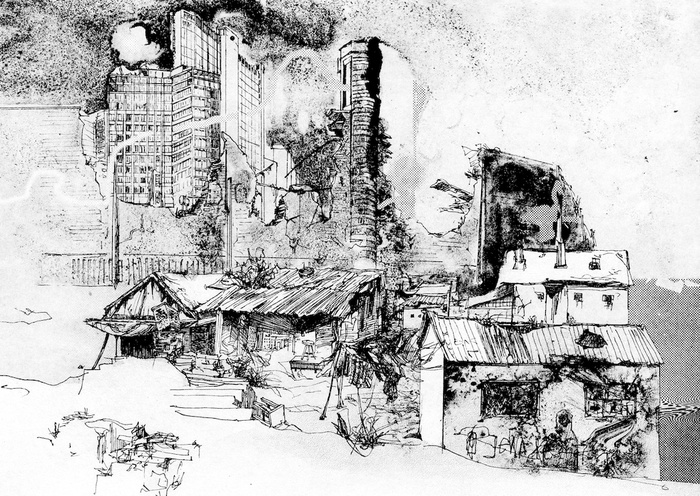 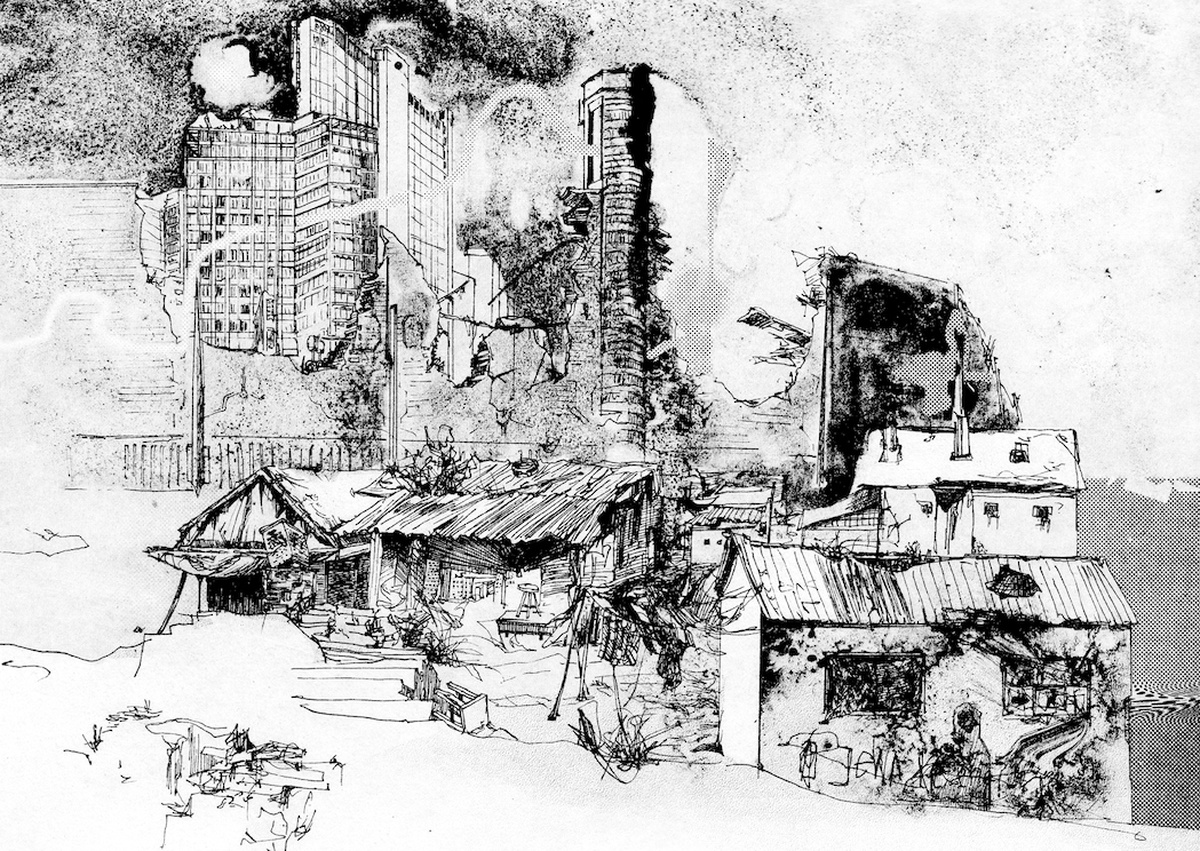 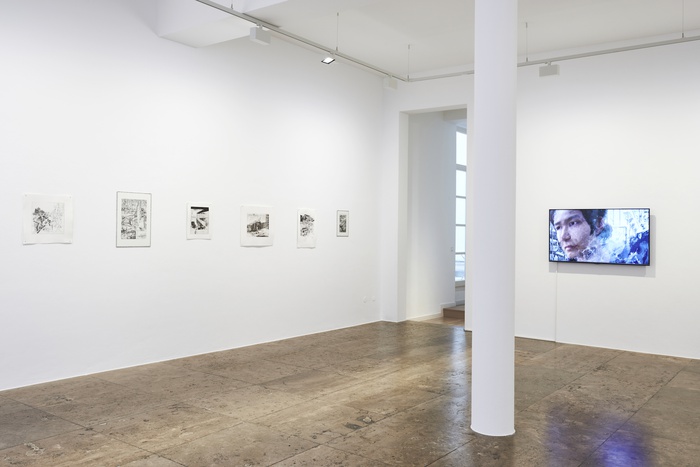 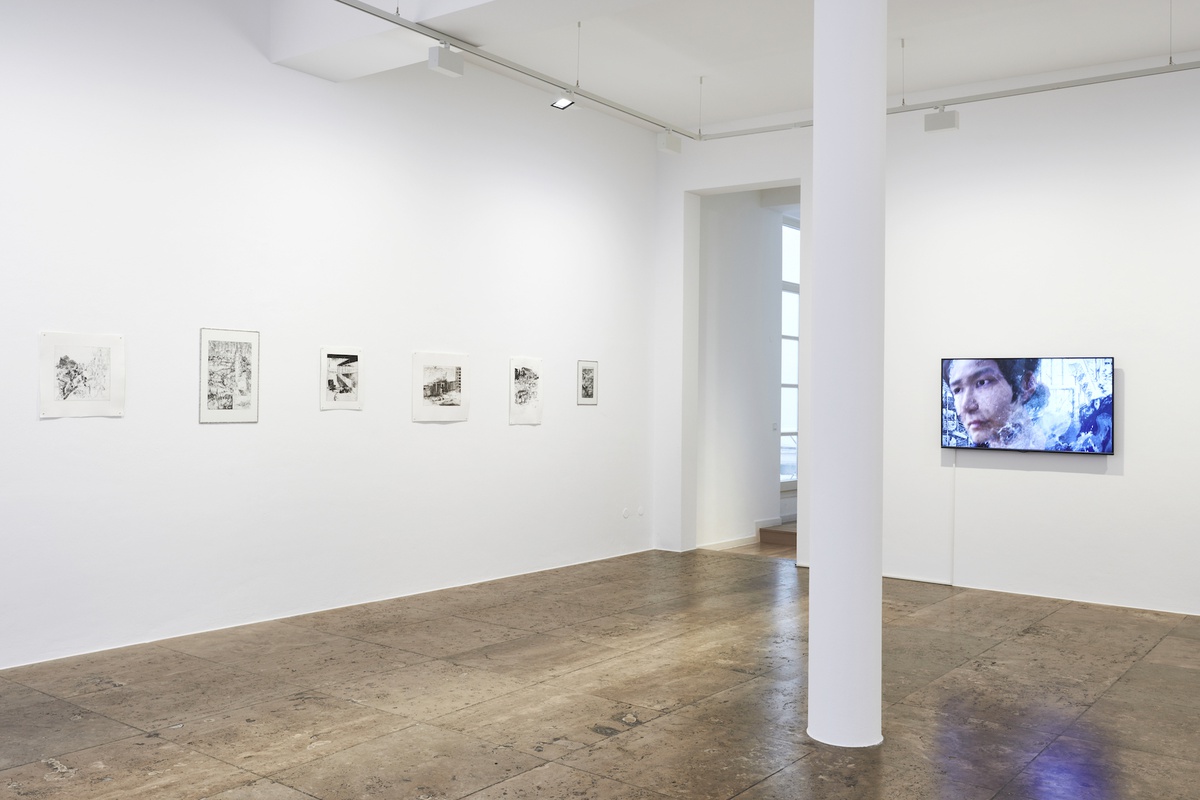 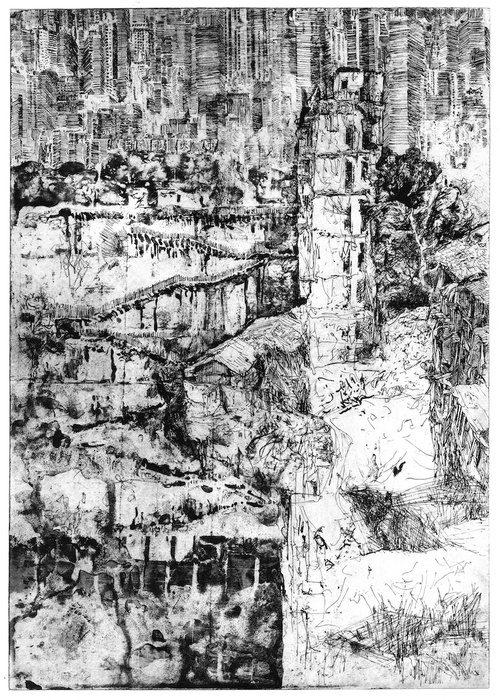 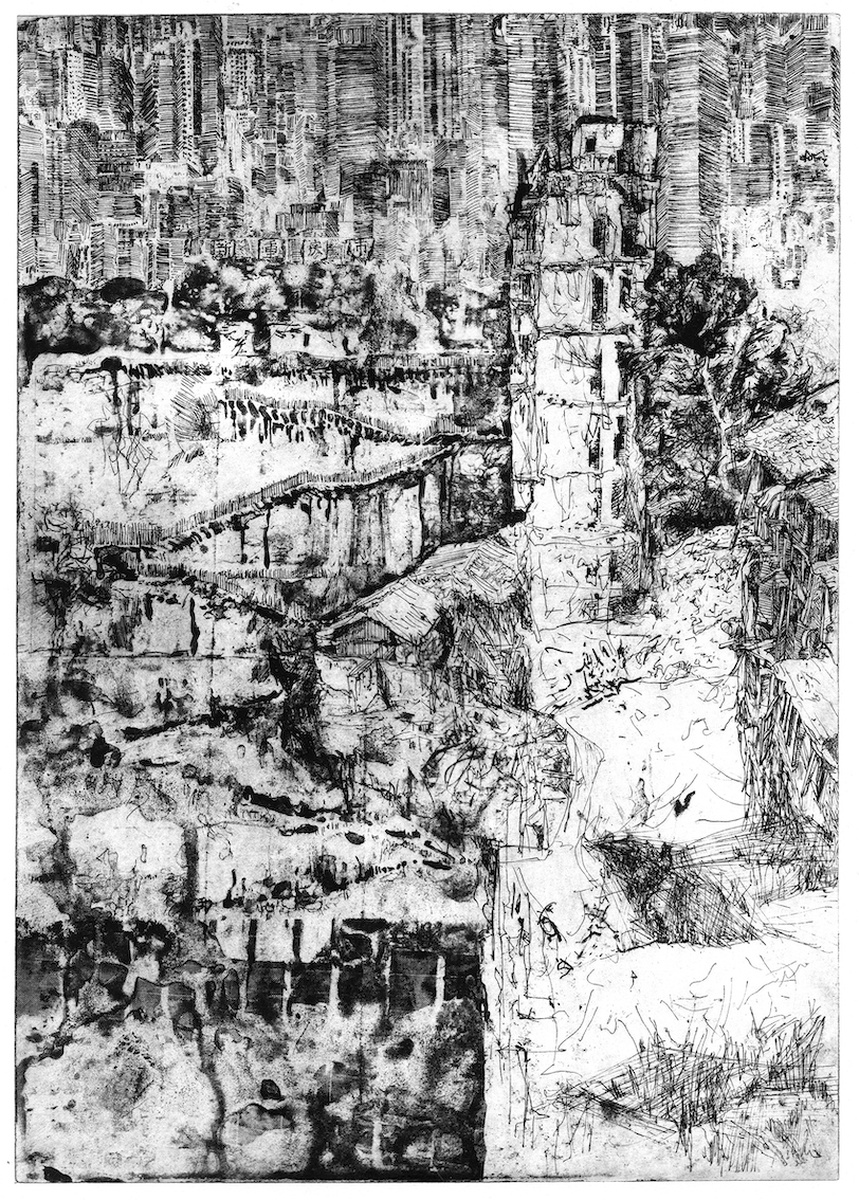 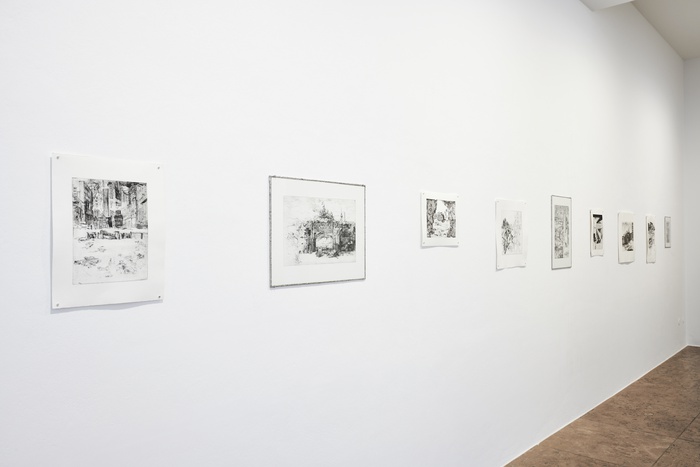 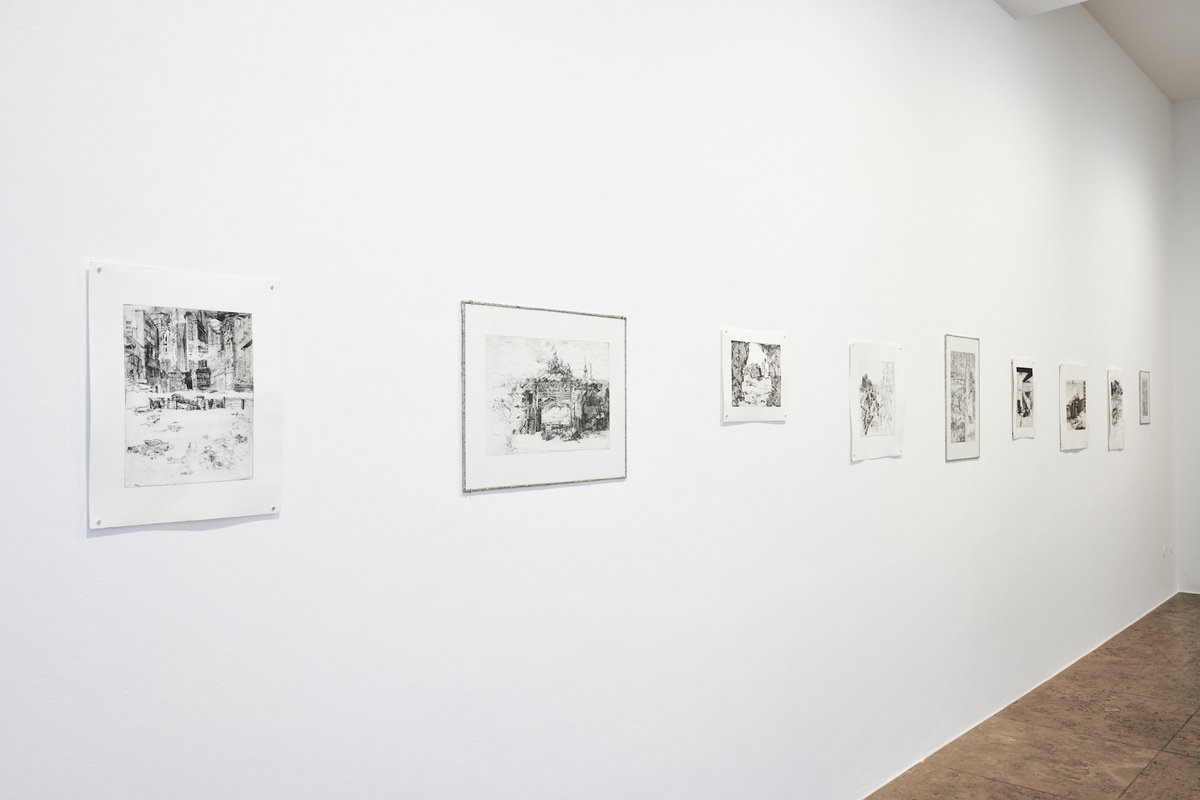 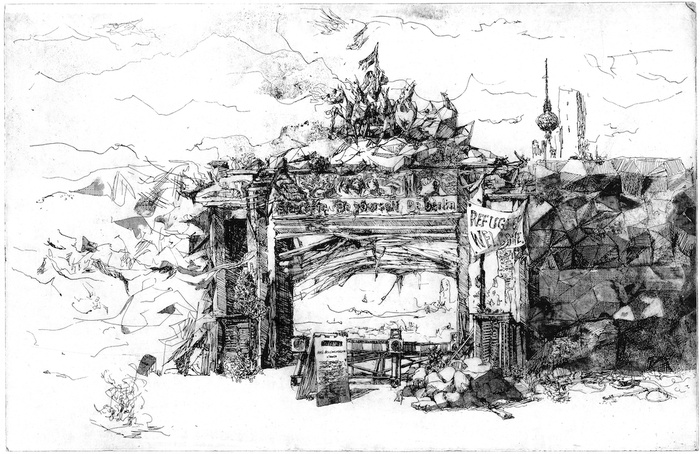 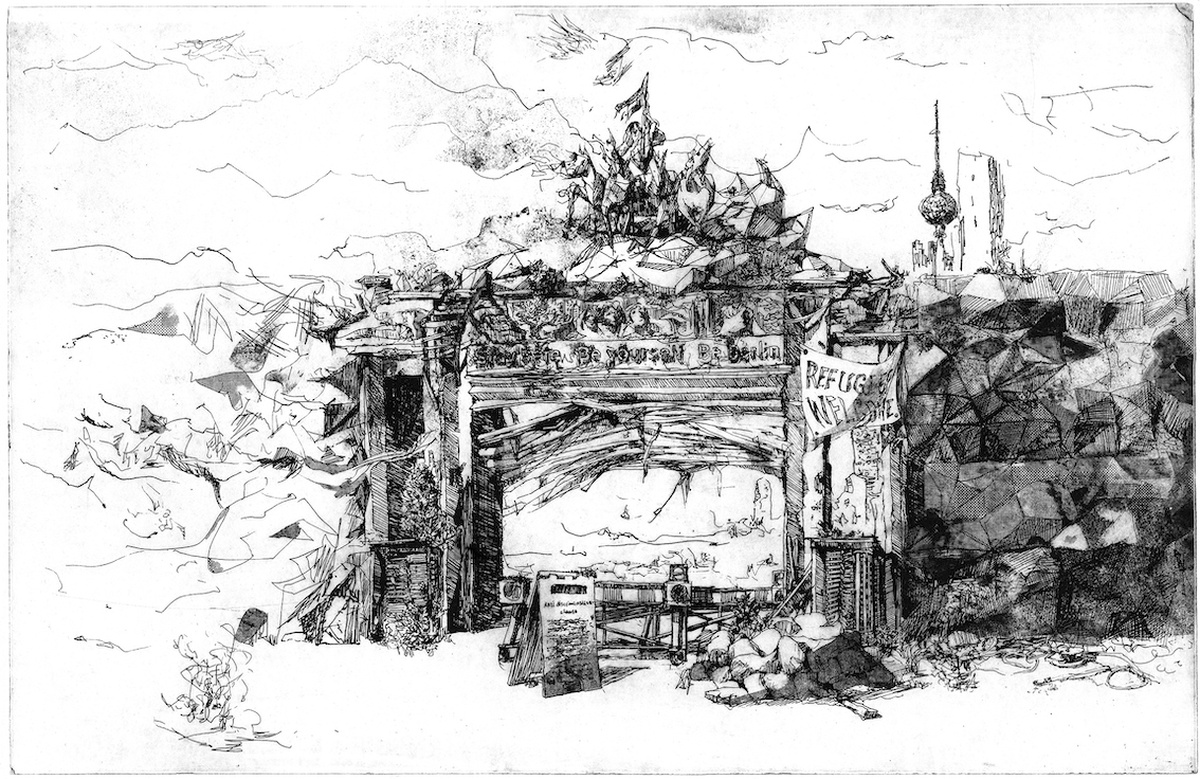 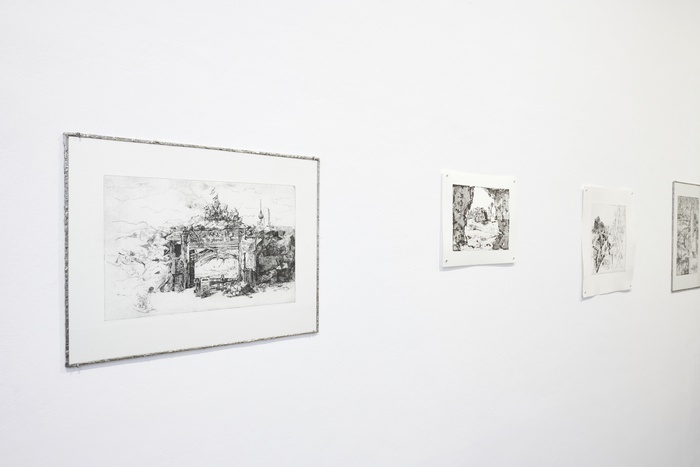 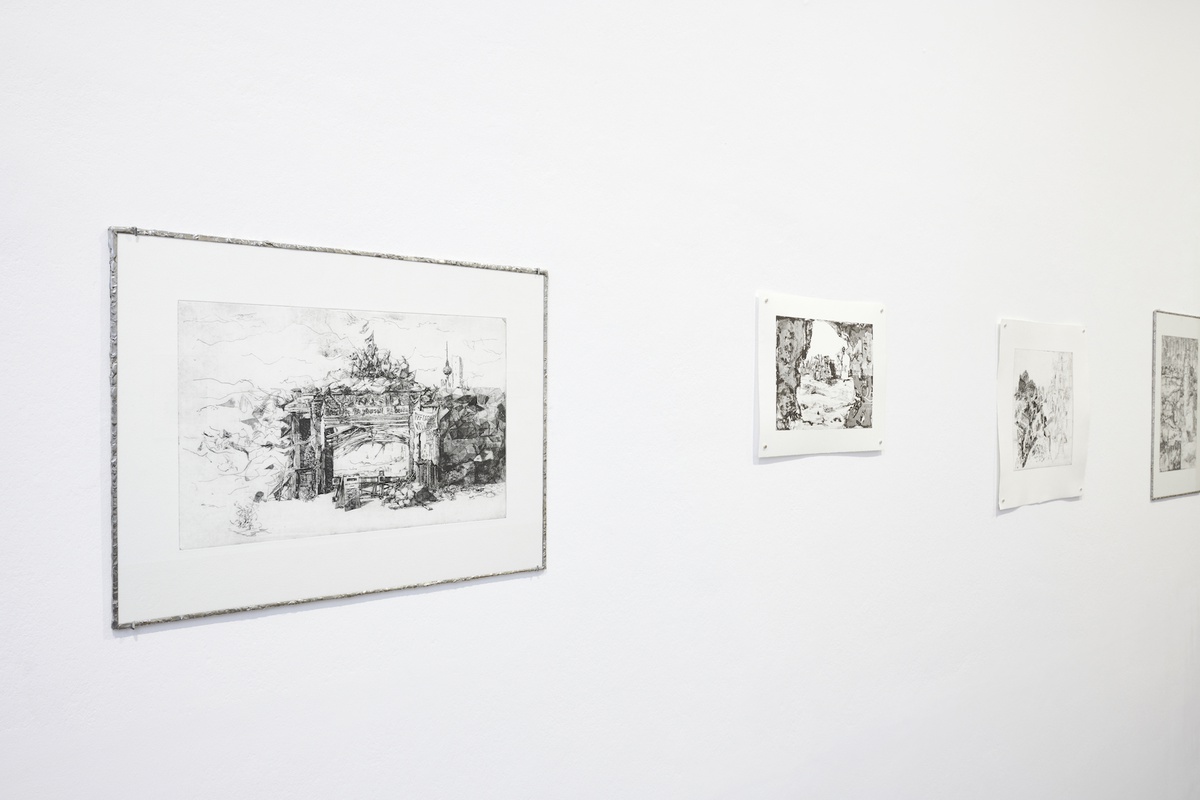 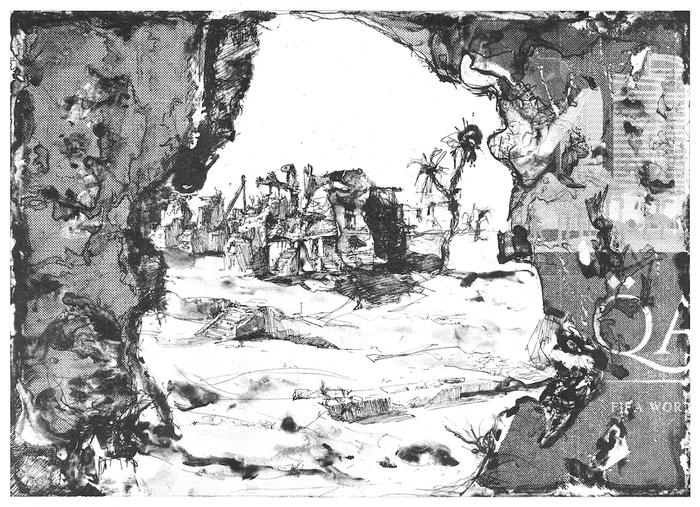 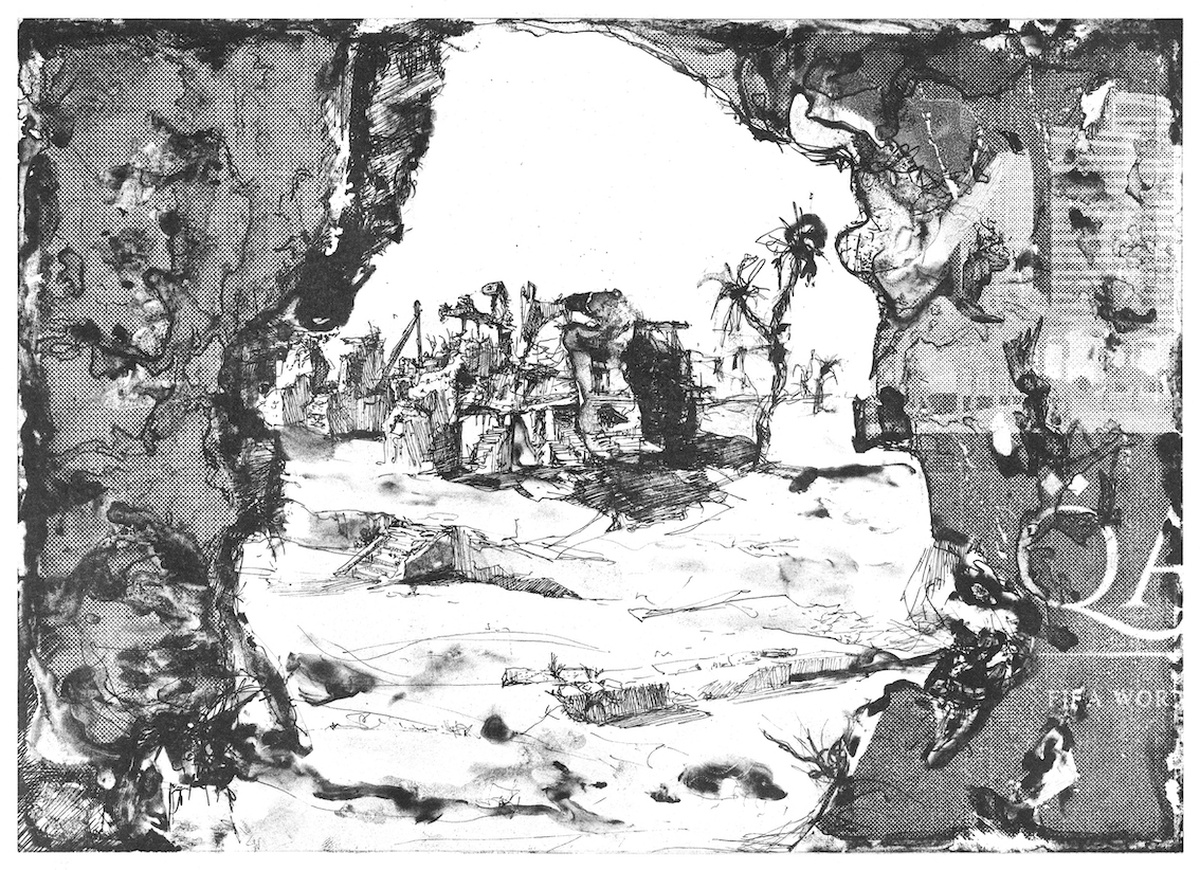 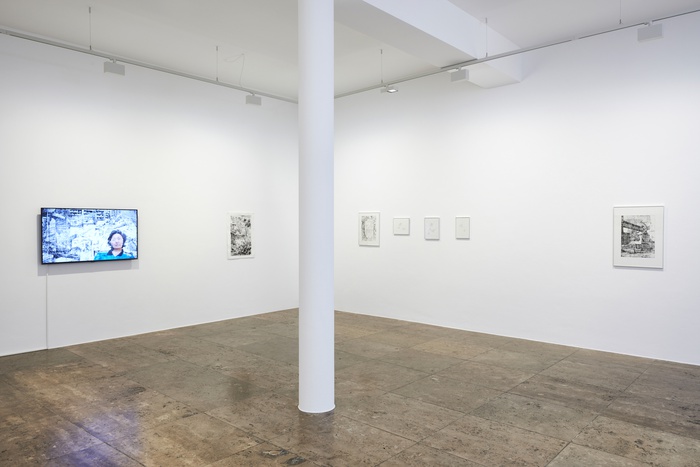 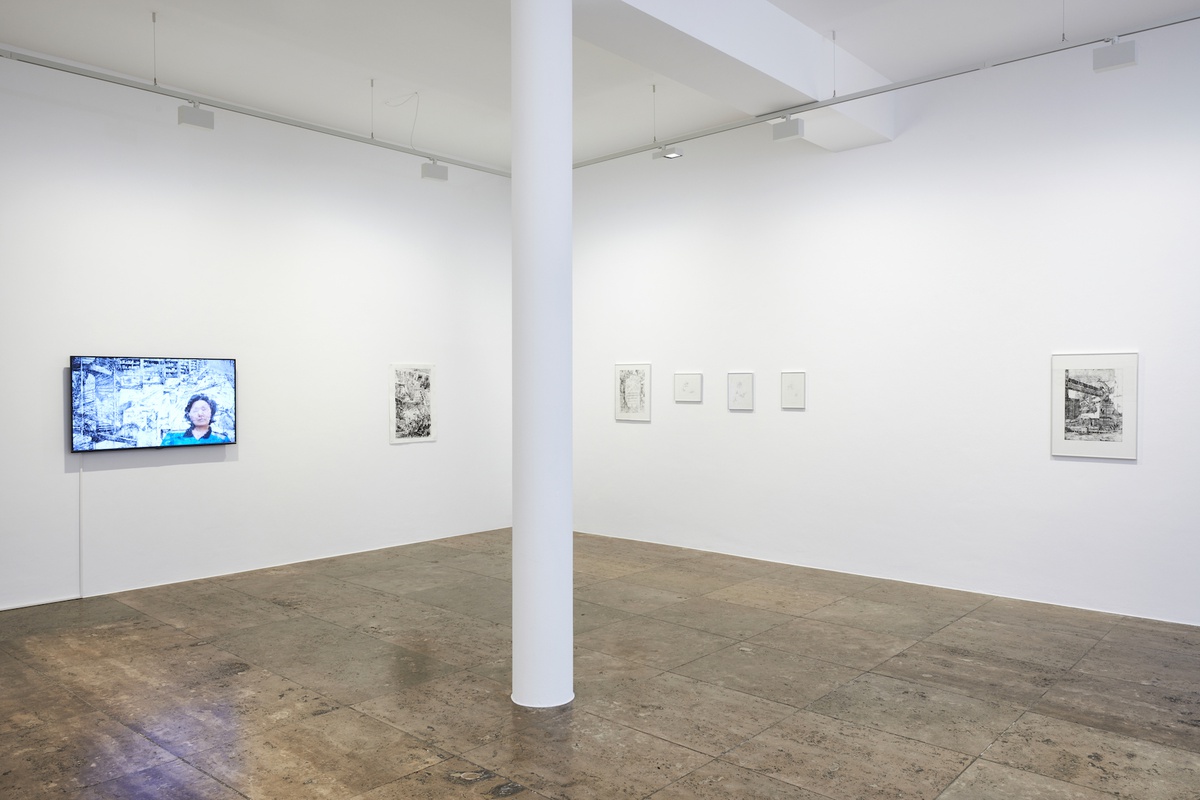 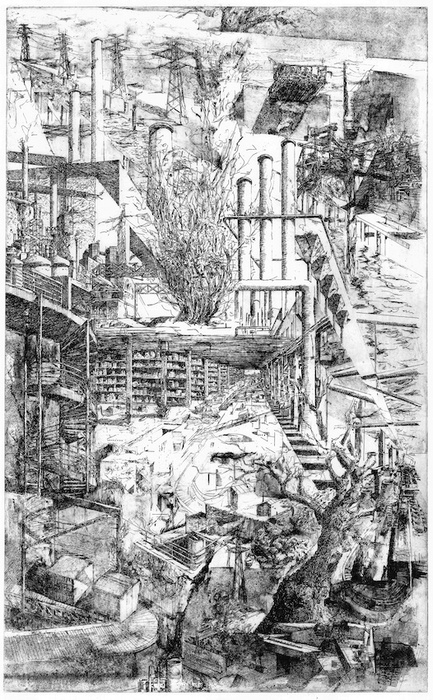 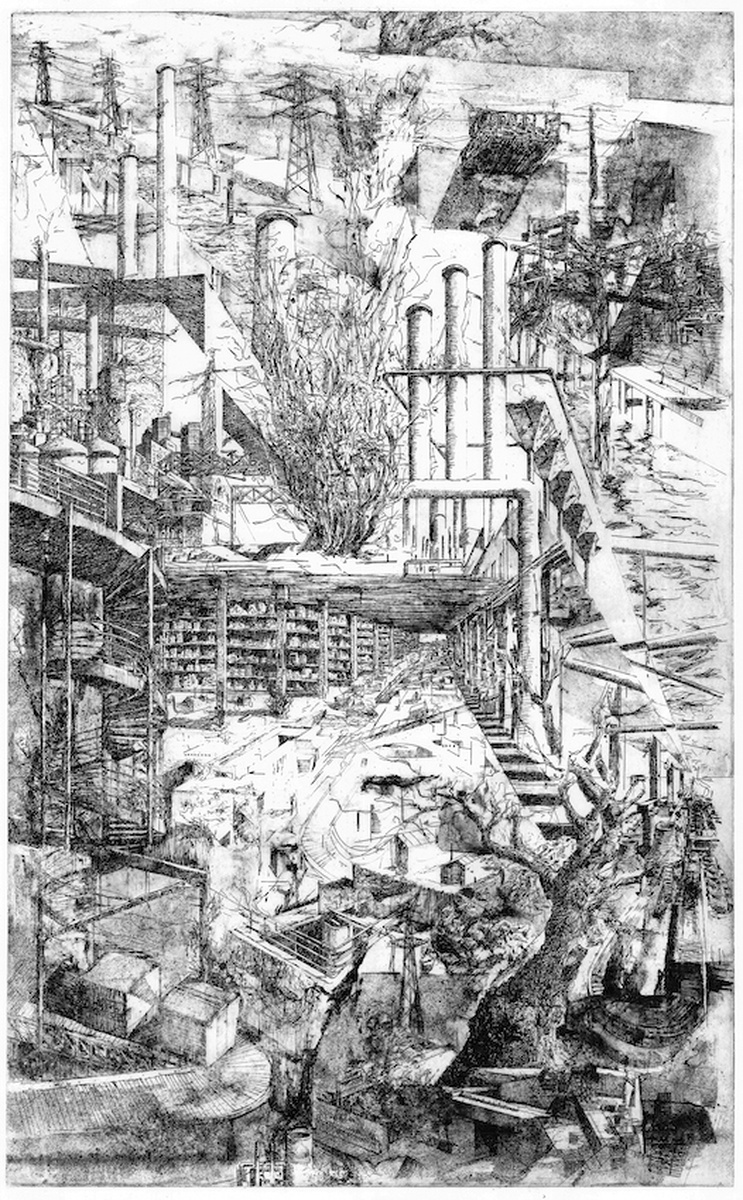 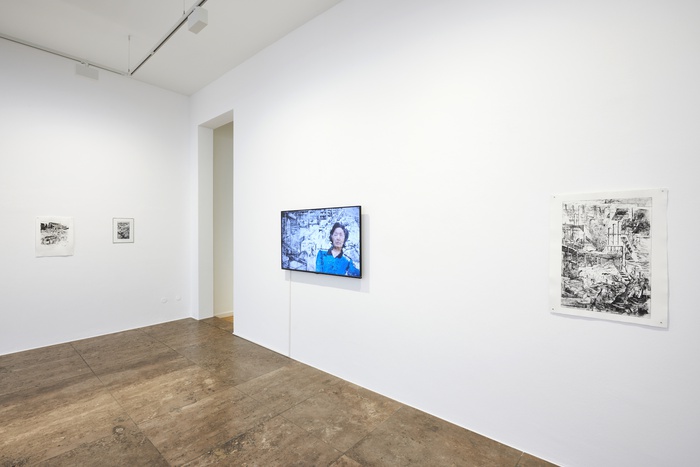 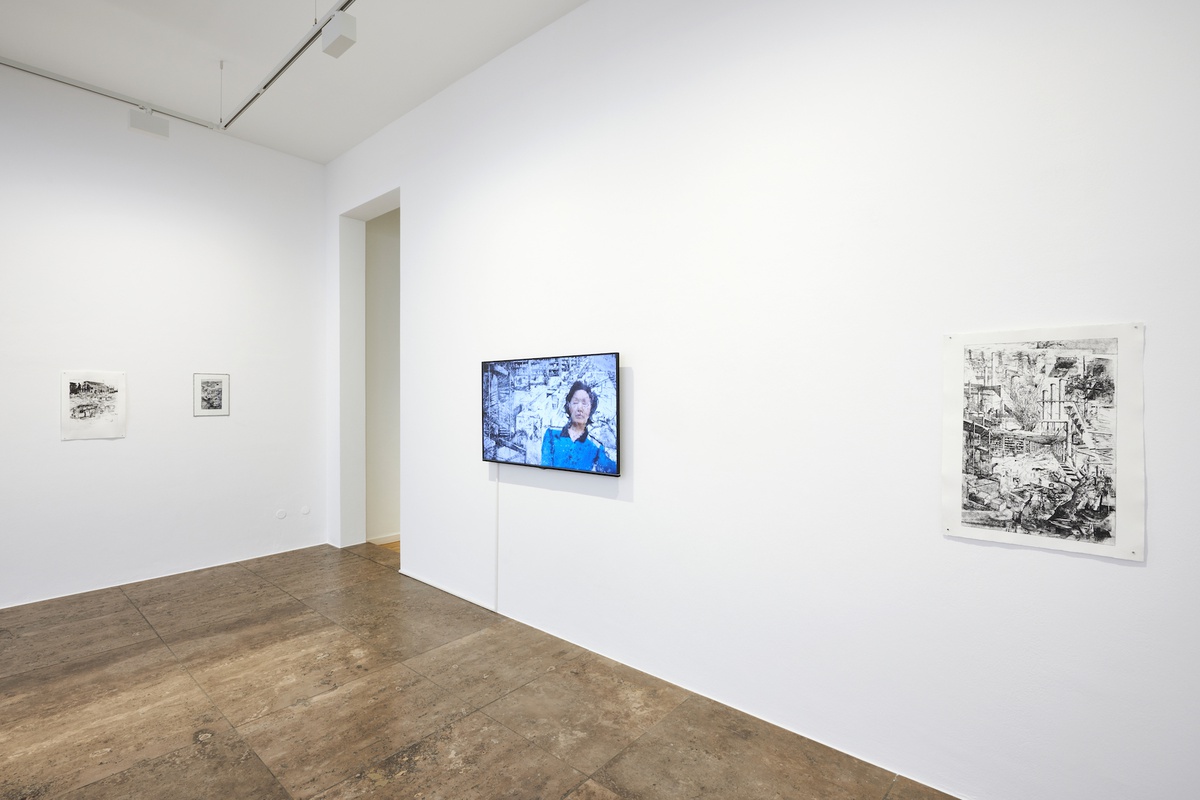 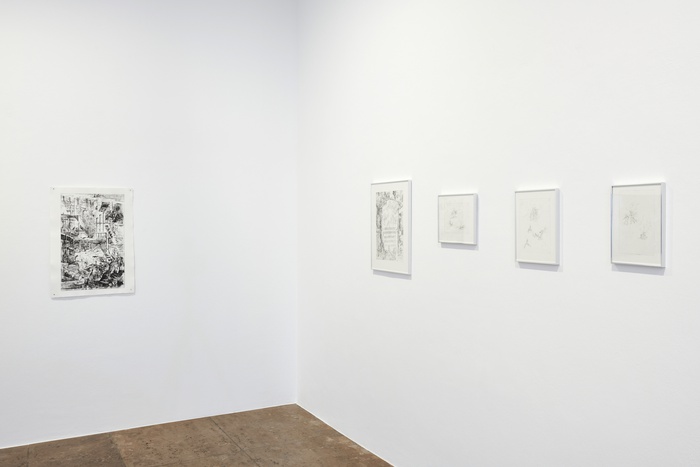 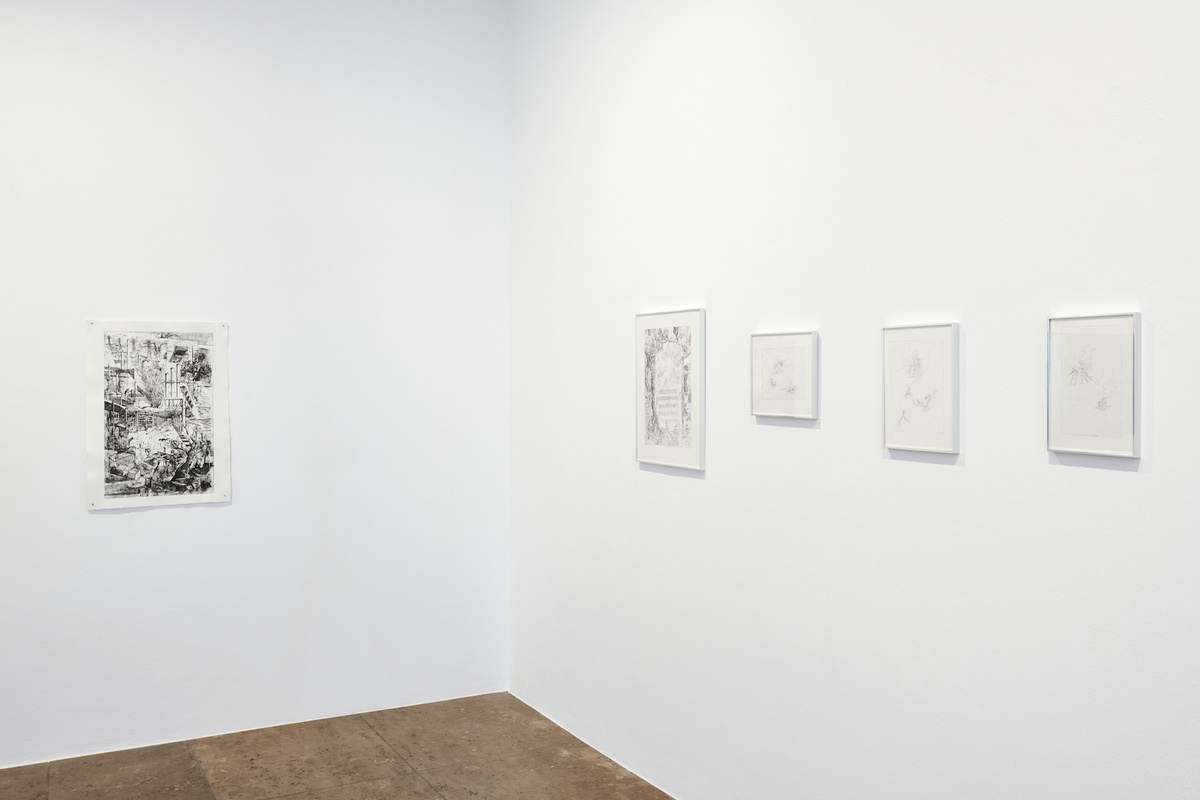 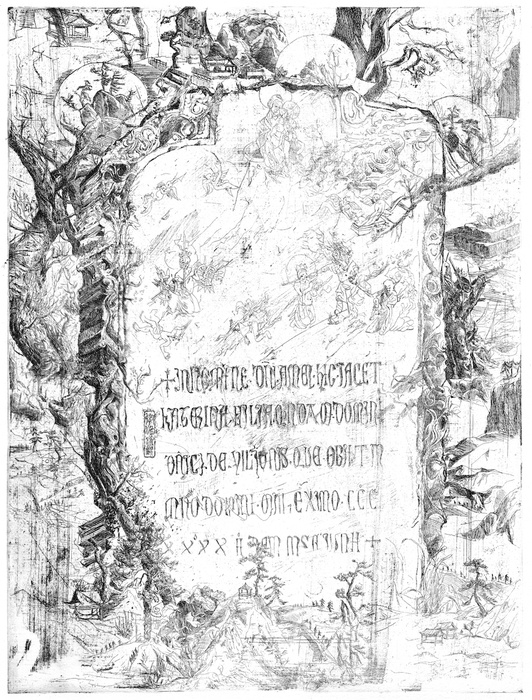 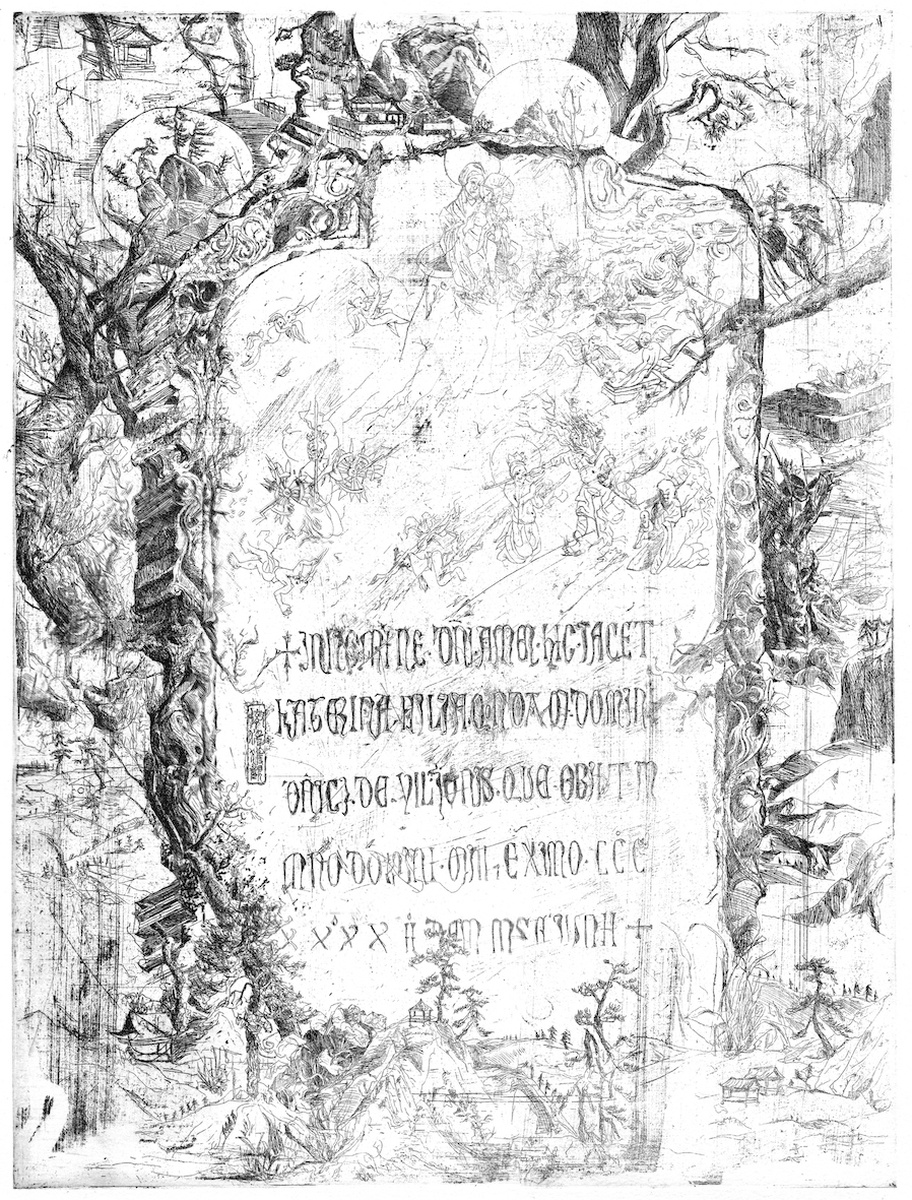 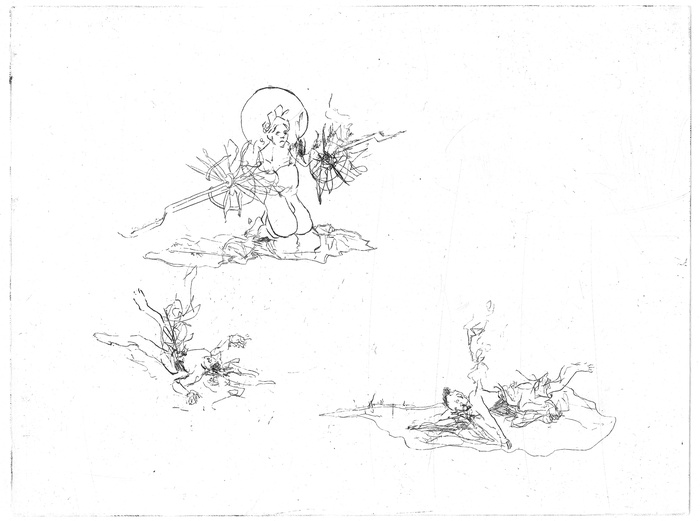 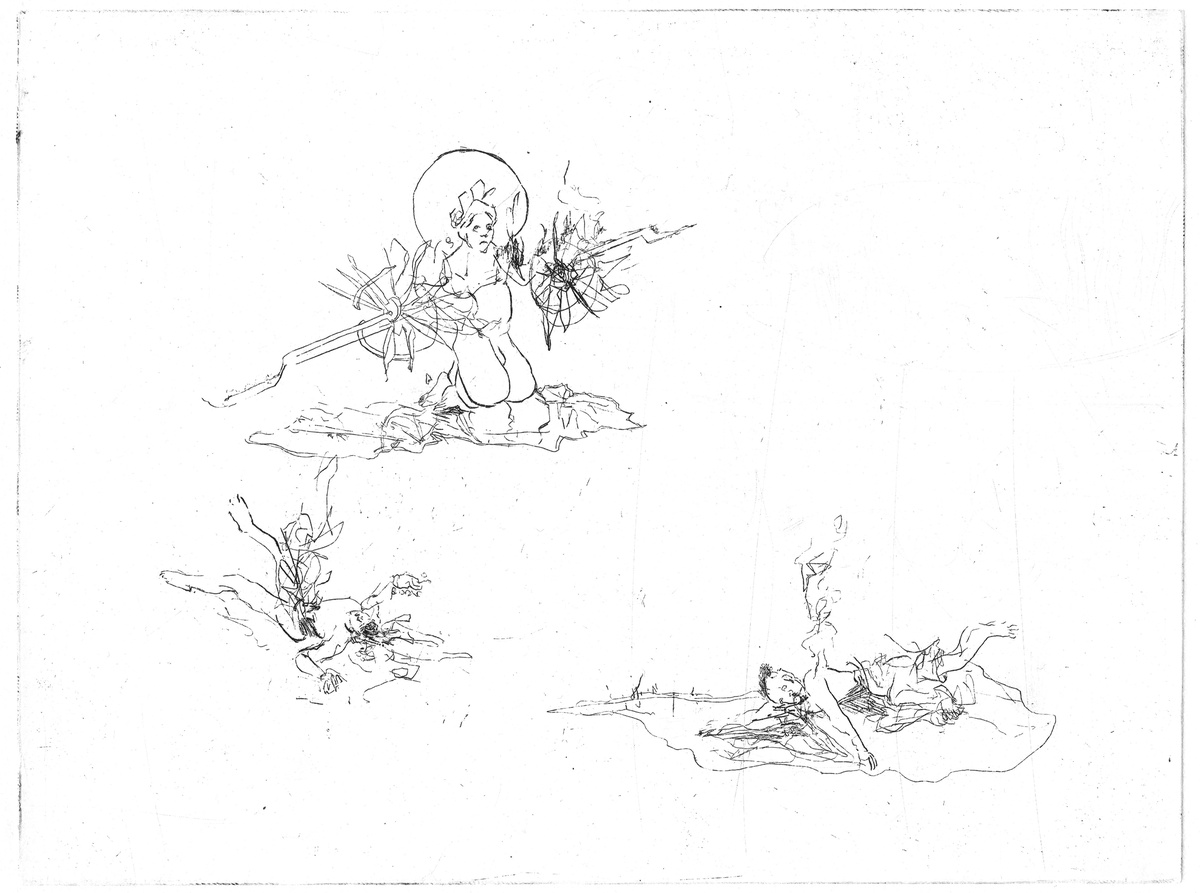 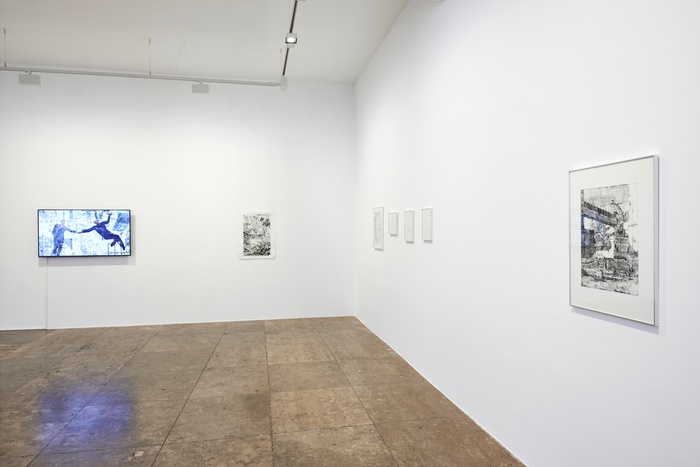 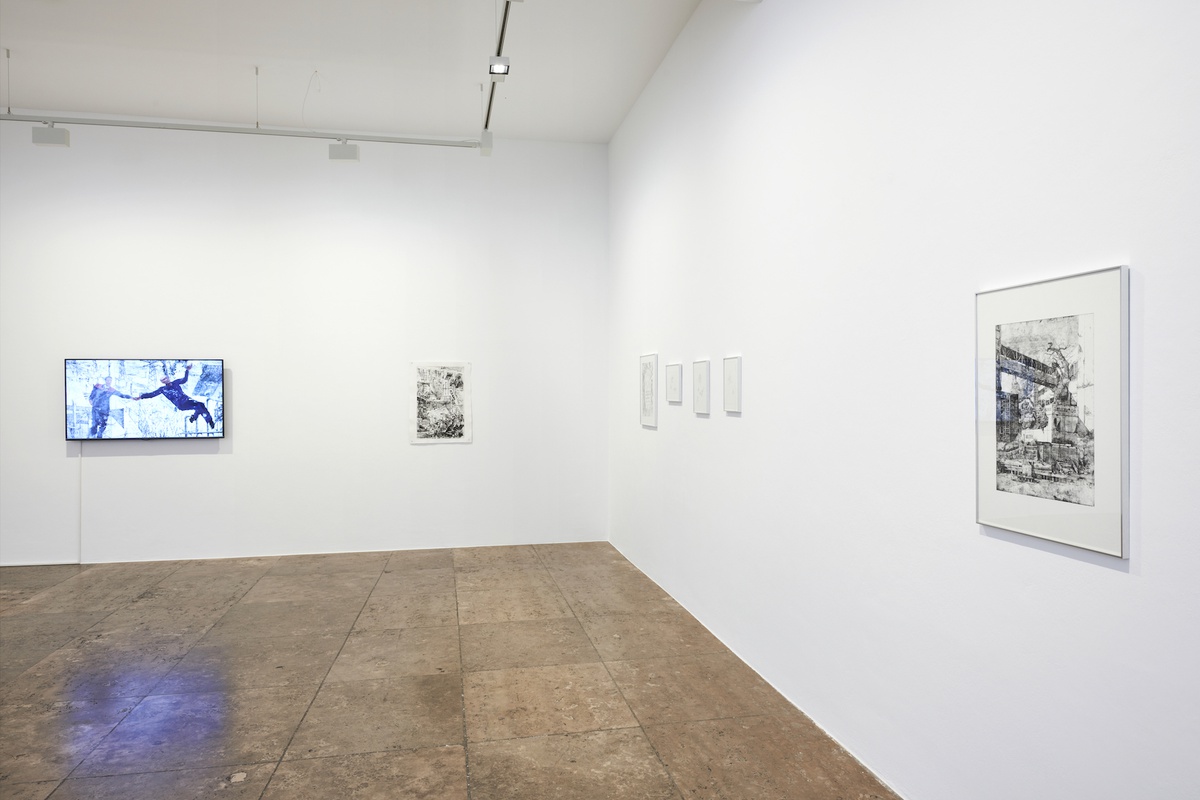 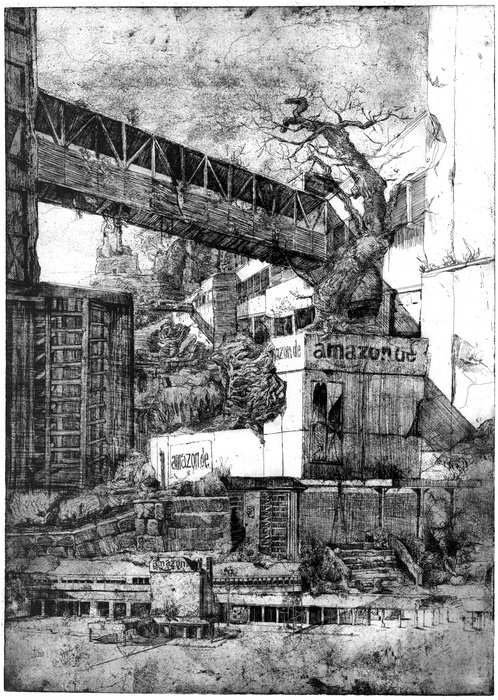 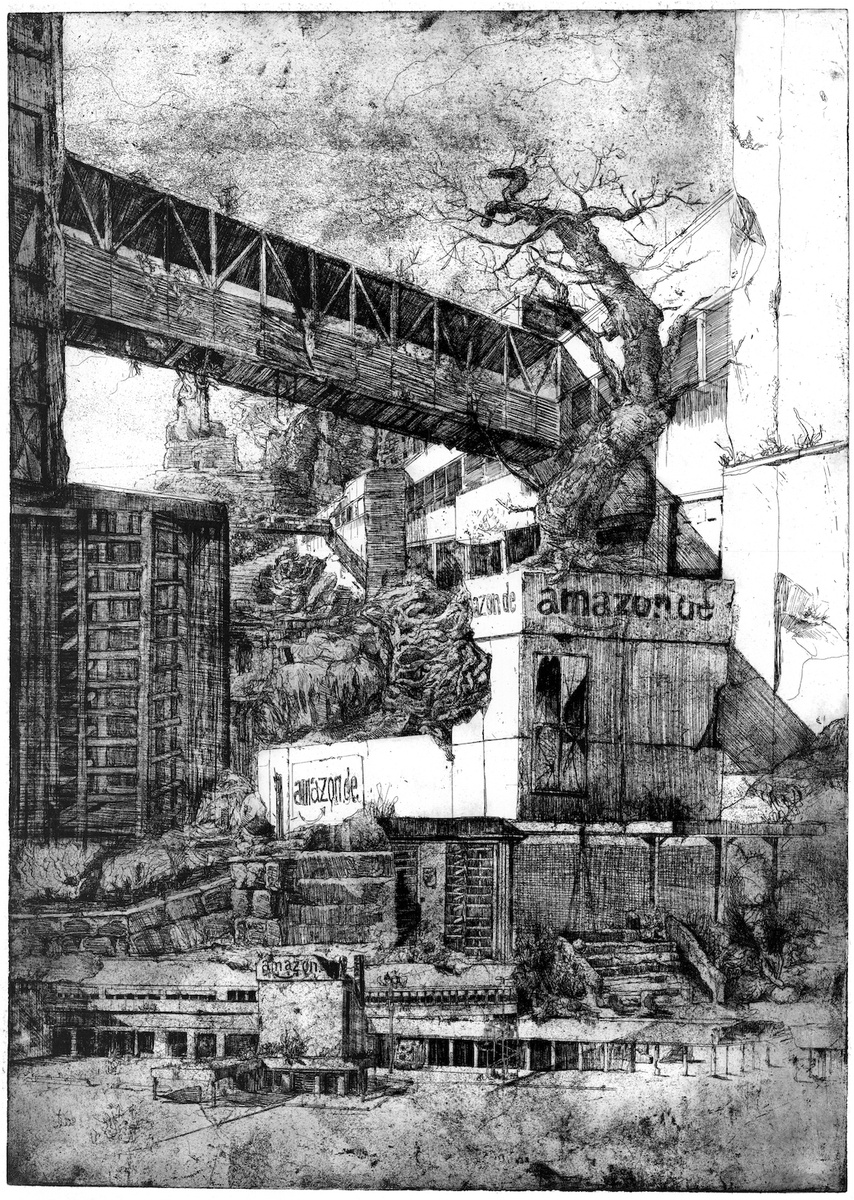 The Future Is Already Cracked

Ideal worlds can be thought forwards and backwards. There are forward-facing utopias, and there is such a thing as retrotopias, idealizations of the past as strongholds of “the good old days.” Soyon Jung’s images lead us in both directions. They are premonitions of the future – told in the past tense of ruined landscapes. For her etching series "Futur II (Future II)" (2019/2020), this mode inspired the title. But does this series really deal with ideal worlds? Numerous headquarters of “major powers” in society – among them the investment company Black Rock, the Facebook Group, the Springer Verlag, and the CSU – are left to the ravages of time. Jung’s etchings reduce to ruins buildings that currently represent the stability and future consolidation of the power of their owners.

Since the romantic era, we have associated images of ruins with a retrospective longing. From the second half of the 18th century, fantastical ruins made constructors dream of the pre-industrial middle ages. In contrast to pristine replicas, their decidedly ruinous nature was intended to make the past tangible and thus root them in a history that had never existed in this painterly form.  Jung’s etchings resist such a romanticized interpretation. In her case, it is not just buildings that are overgrown and seem to gradually dissolve; any realism in her images, produced by lines, disintegrates eventually. The apparent romantic idealism is counteracted by the occasionally aggressive internal dynamic of her line work, which calls to mind the abstraction movement of the 20th century and the attempt to free itself of any historical references or content. As such, the images defend themselves against interpretations that would too quickly reduce them to either motif or concept. The fact that Jung encourages the graphic “self-defence” of her images through digital glitches and gridded areas, as used in Manga, shifts the old artistic conflict between the primacy of content and the autonomy of form into the present, from where a fleeting glance at traditional etching techniques might still be possible.

Now Jung presents a new series of etchings, "Aushungern und demoralisieren (Starve and Demoralize)" (2020/2021), whose descriptive title is stunningly specific. Who is starving? Whose morals are being undermined? Again she lets the timelines run in a zigzag: since future metropolises may have to protect themselves against rebellious rural populations, the historical function of city walls experiences a revival in her imagined future. Current social upheavals are being retold and intensified here: gentrification based on a city wall in Paris between the city center and the Banlieue outskirts; the exploitation of the Chinese rural population exemplified by new walls in Beijing and Chongqing; the expansion of agriculture at the expense of rural lifestyles in an image of a future city wall in Seoul; the city as a place of refuge and a safe space for minorities, but also as a haven for a privileged and globally mobile academic middle class that shows less and less understanding for local village life – in this case, social alienation is expressed using a reconstructed Berlin Wall. And again, the futuristic structure of the surface of the wall, which here crosses the image horizontally, is burst open by free moving lines that strive to be more.

At one time, the function of city walls was to defend against external attackers, but also to protect the internal social order through the rigid expulsion of the sick, criminals, or people from foreign cultures. What would it mean if growing cities of the global present resorted to these kinds of bulwarks in a potentially post-national future? And what would it mean in this context if the slogan “starve and demoralize” gained traction? This was once declared the intention of the organized sieges of cities by foreign armies. But it will more likely be armies of the poor who will besiege our unaffordable cities in the future. Or could it be turned around: is it poor in the slums of the world that have been starved and demoralized next to luxurious gated communities? Jung limits herself to hinting in her etchings and also blurs meaning through the occasional use of the past tense: for her, cities and future bulwarks have already fallen; the scenes are empty of people. Are her envisioned futures utopian or dystopian? In these images, too, what triumphs in the end is the autonomy of the line – the rest is just a series of possible things that have been.

Although Jung uses a historical artefact - the tombstone of Katerina Vilioni, who died in 1342 – as a motif for the four etchings entitled "Katerina" (2020), the images also invite speculation. The stone was found in the 1950s by the Chinese People's Liberation Army among diverse materials that were, of all things, used for the city wall of Yangzhou. It is one of the earliest pieces of evidence of the Europeans who settled in East Asia. Katerina Vilioni was a member of a family of merchants from Genoa who settled at the other end of the Silk Road. Her family was already trading in Tabriz in Iran in the 11th century. The year of Vilioni's death suggests that she fell victim to the plague that spread along the trade routes. The reduced imagery on her tombstone combines Asian and European visual languages. The execution of Saint Catherine of Alexandria is shown in a kind of picture story, a mythical figure of Christianity often portrayed in European art history. At the behest of the Roman Emperor Maxentius, she is said to have been tortured and executed after converting 50 of his best philosophers to Christianity. Angels are said to have accompanied her during the martyrdom and taken her body to Mount Sinai, where today the Greek Orthodox Monastery of Saint Catherine’s – one of the oldest Christian convents – still stands on Islam-dominated territory. Mohammed himself is said to have issued it with a letter of protection, saving it from conquest and destruction to this day. The historical references and thought processes that Jung’s etchings depict are as interlaced and frayed as her drawn lines. Irrespective of whether you start with Katerina Vilioni or Catherine of Alexandria, whose story – another historical digression – apparently goes back to the Greek mathematician Hypatia, who was murdered in Alexandria in 415. This time the murder was committed by Christians determined to dispense with an educated pagan woman. History itself is full of possibilities of what has been, which splinter and reshape the supposed certainties of the present.

The film "Aufstand der Lageristen (Uprising of the Warehouse Workers)" (2021) is not really a film, but rather an image in which the branching paths of Jung’s etchings literally start to move. While the eye of the camera pans slowly over image landscapes where factory buildings, warehouses and package centers are suggested and overlaid, men and women in the foreground hover in blue work uniforms. These are the warehouse workers referred to in the title. Their uprising, however, is more like a quiet dance between patches of digital fog, calling to mind notions of resurrection and ascension to heaven rather than earthly rebellion. But we are urged to see the precariousness of workers who, driven by rapid developments during the corona pandemic, pack and organize boxes of impersonal products, monitor rolling robots and impellers and carry out deliveries. Sometimes we encounter them in fleeting moments in front of our own doors. But the radical quality of the title, the uprising, makes Jung’s composition a catalyst for thought: are the warehouse workers already rising above things or are they entangled in a veil of conditions that make them invisible?

Soyon Jung (born 1982 in Gwangju, South Korea) combines classical etching with digital printing techniques, video and 3D photography. She studied in Seoul and Hamburg, where she now lives and works.