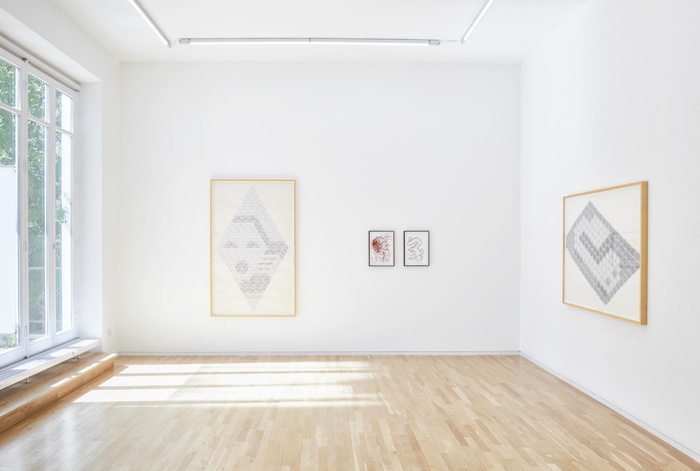 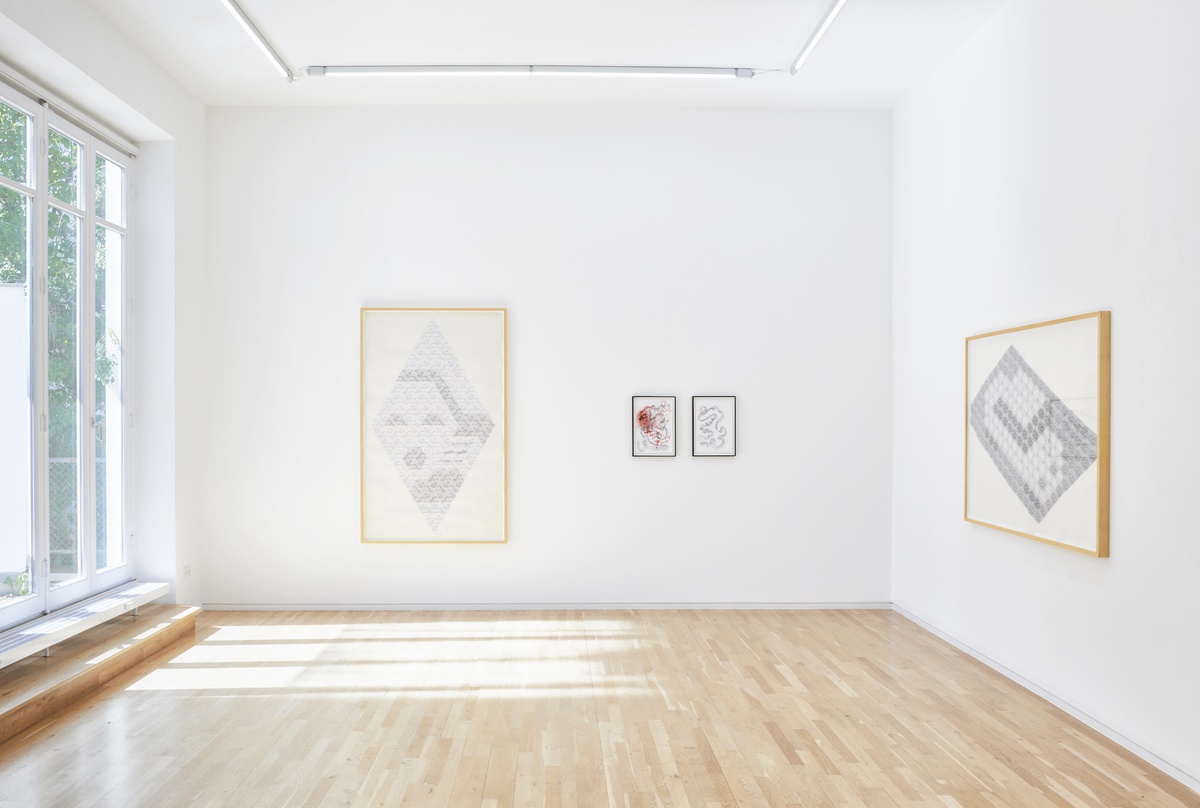 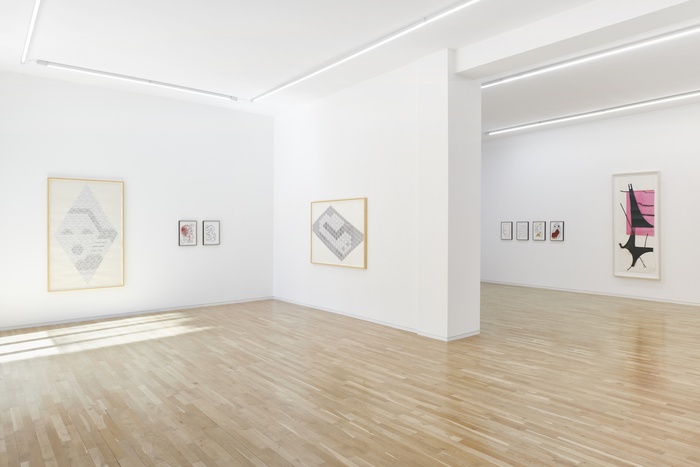 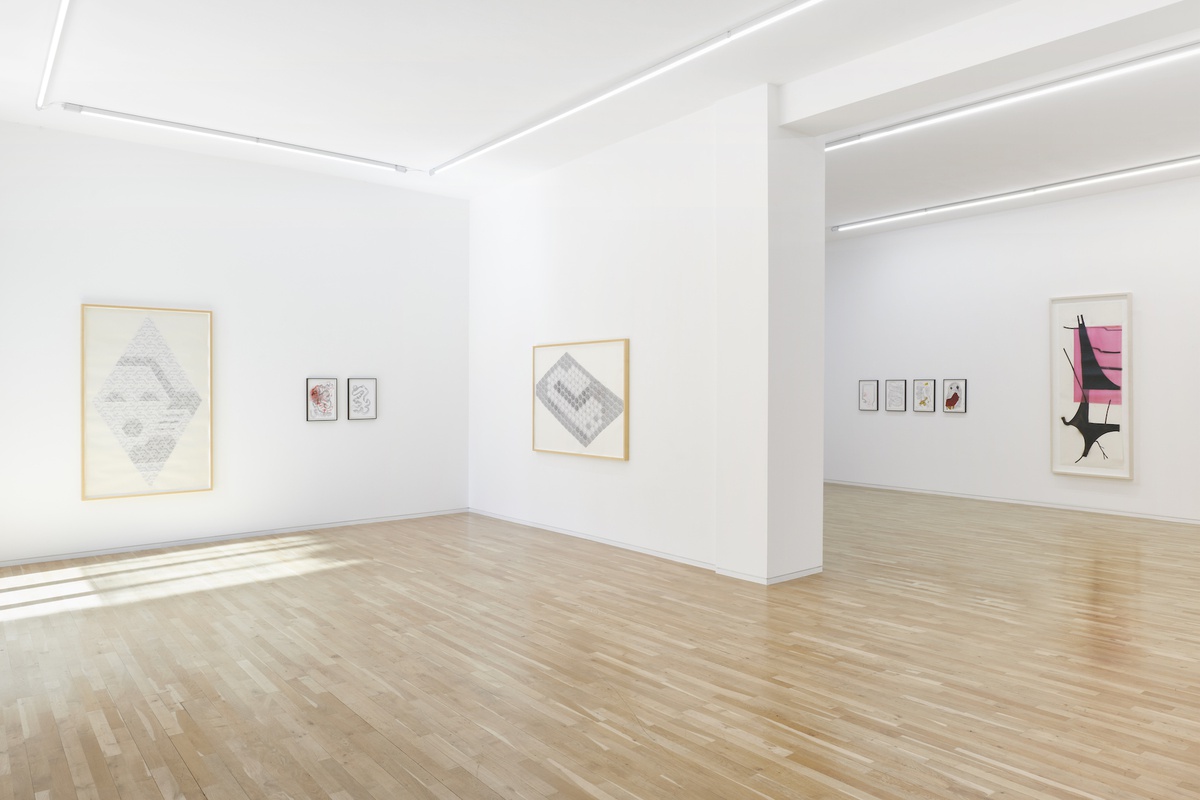 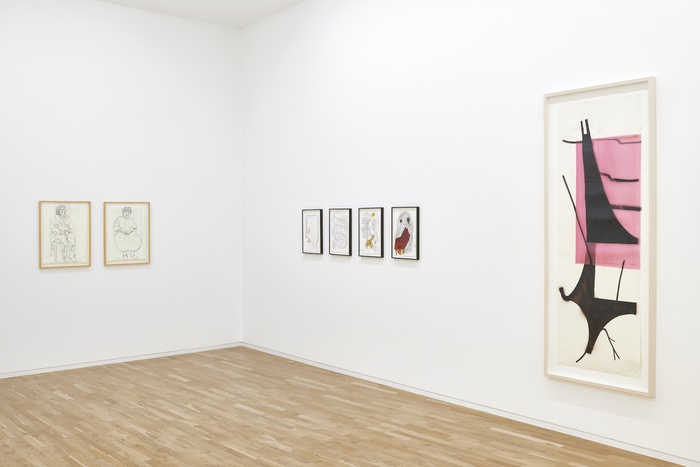 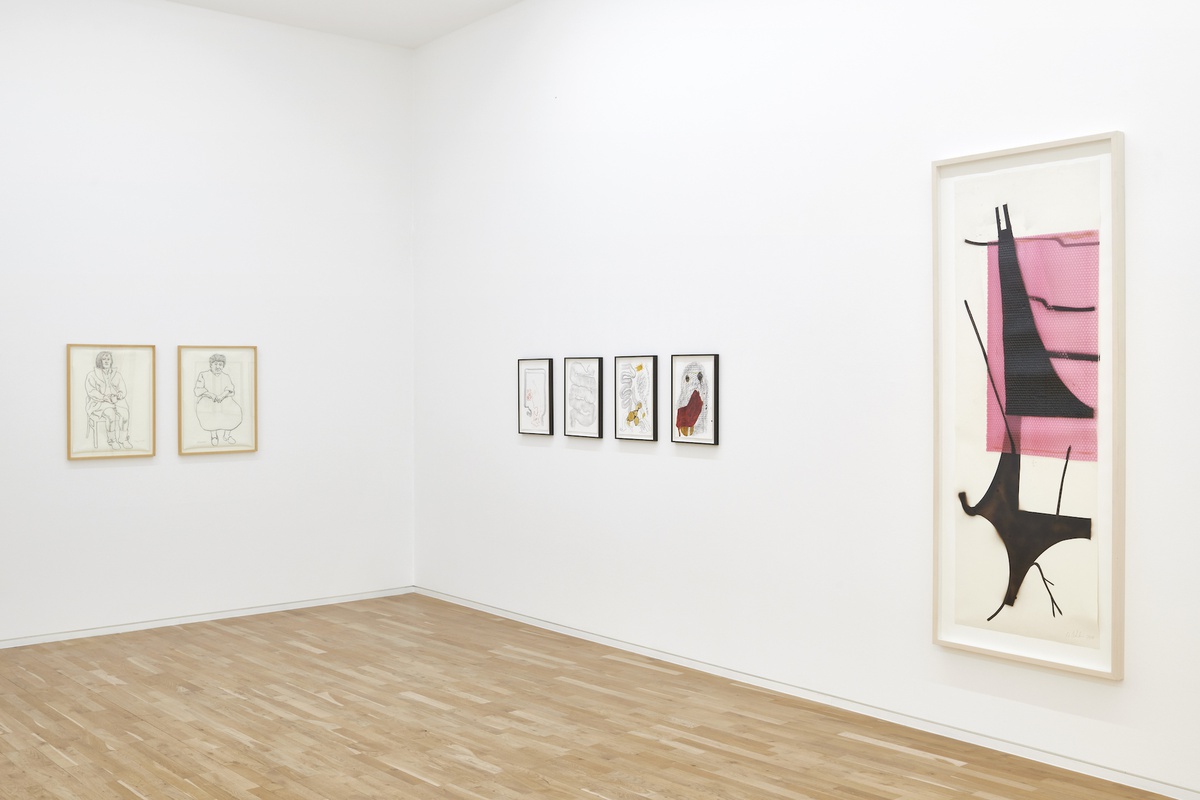 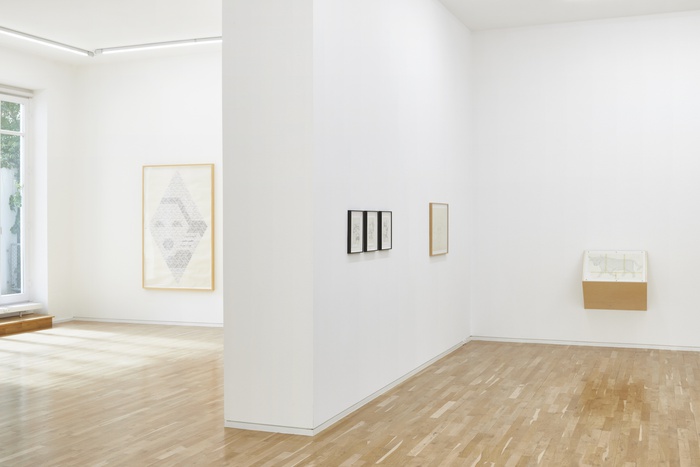 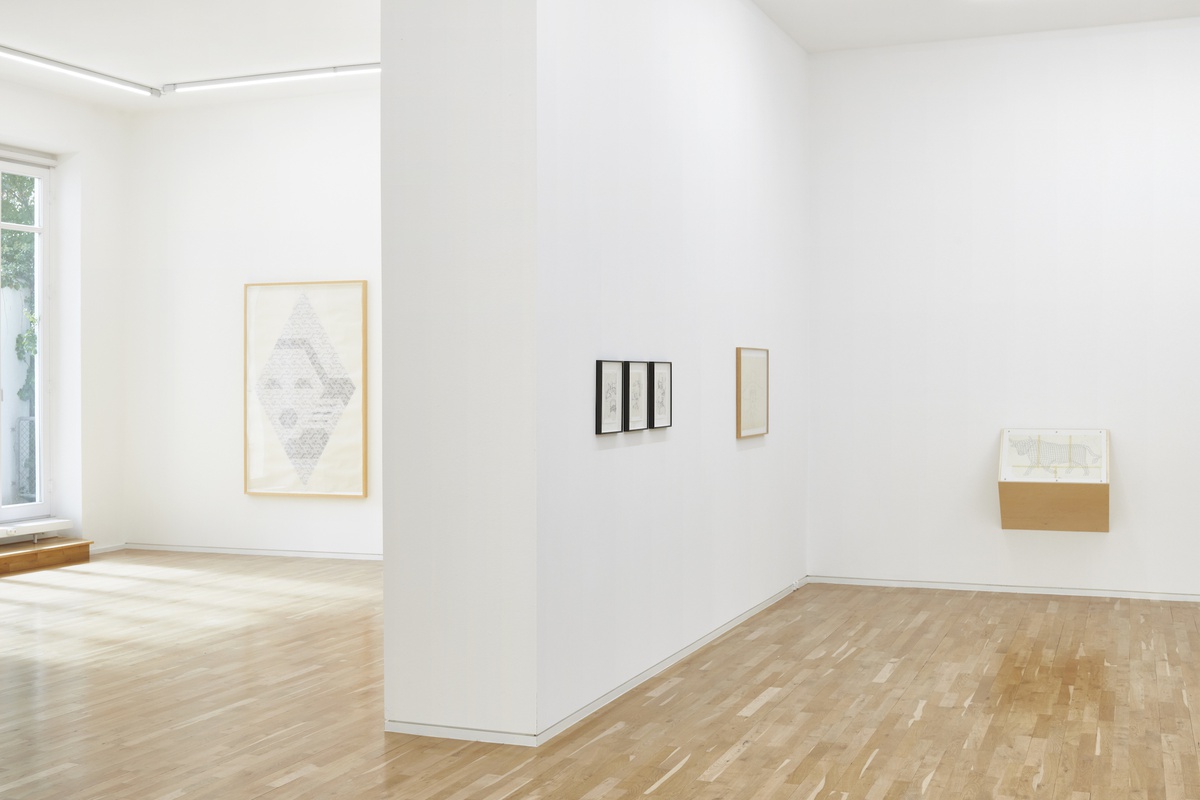 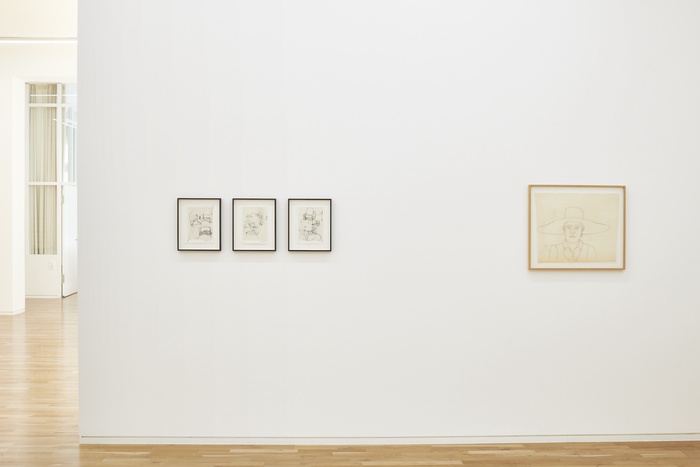 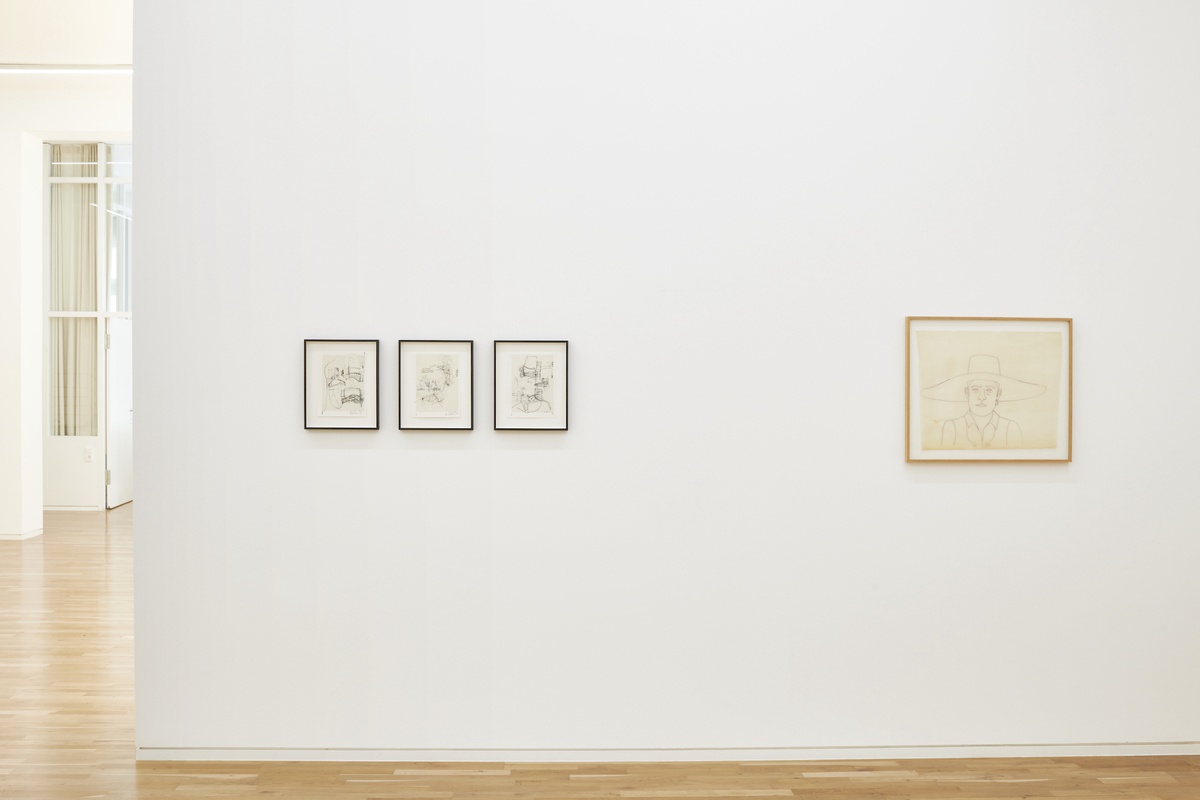 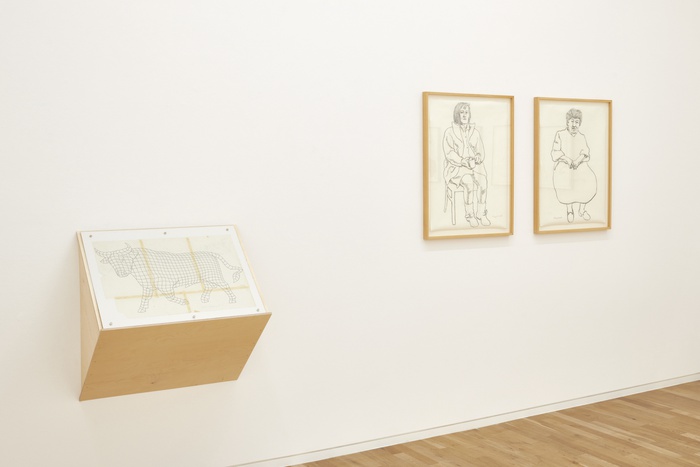 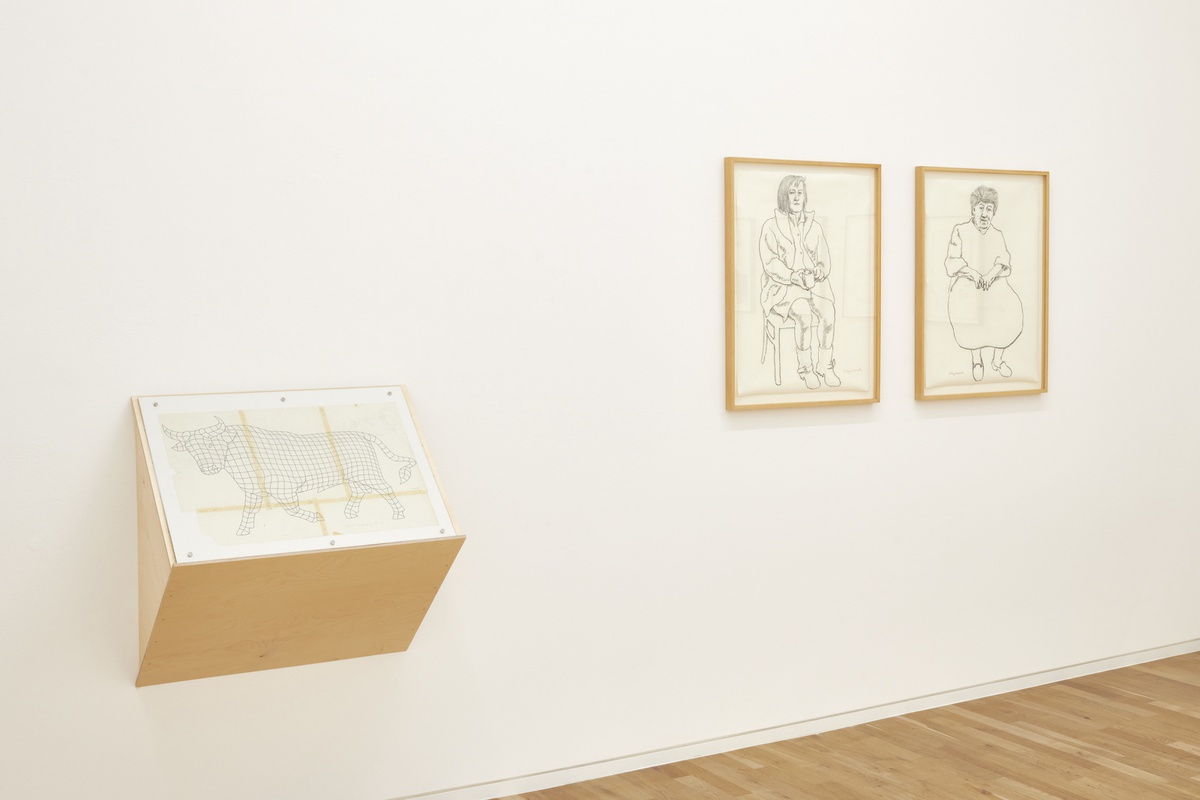 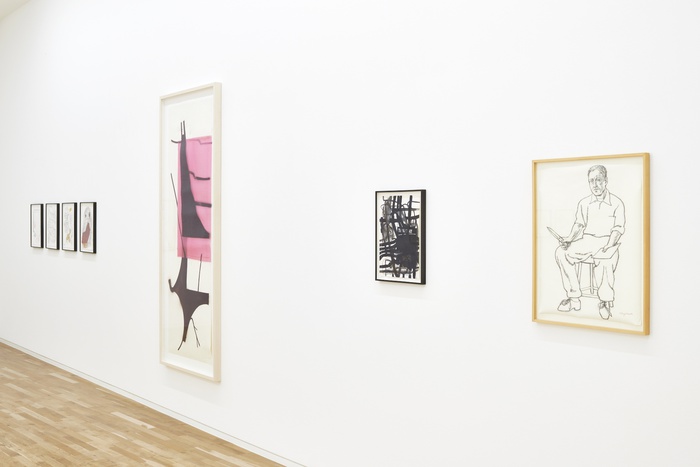 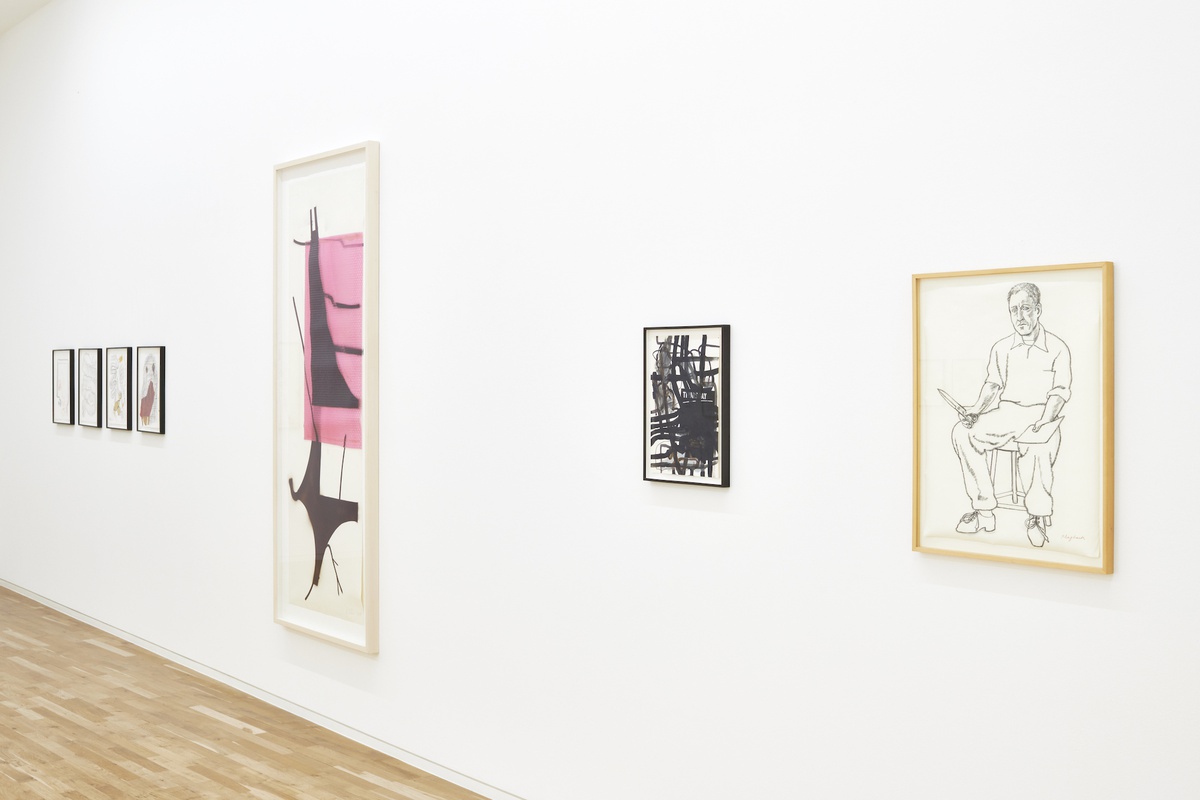 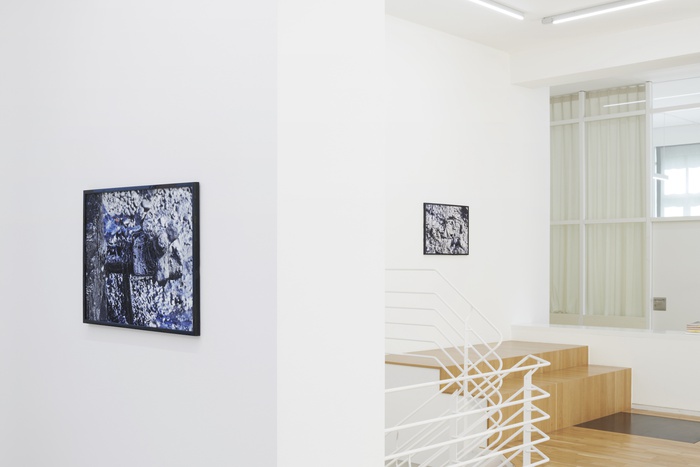 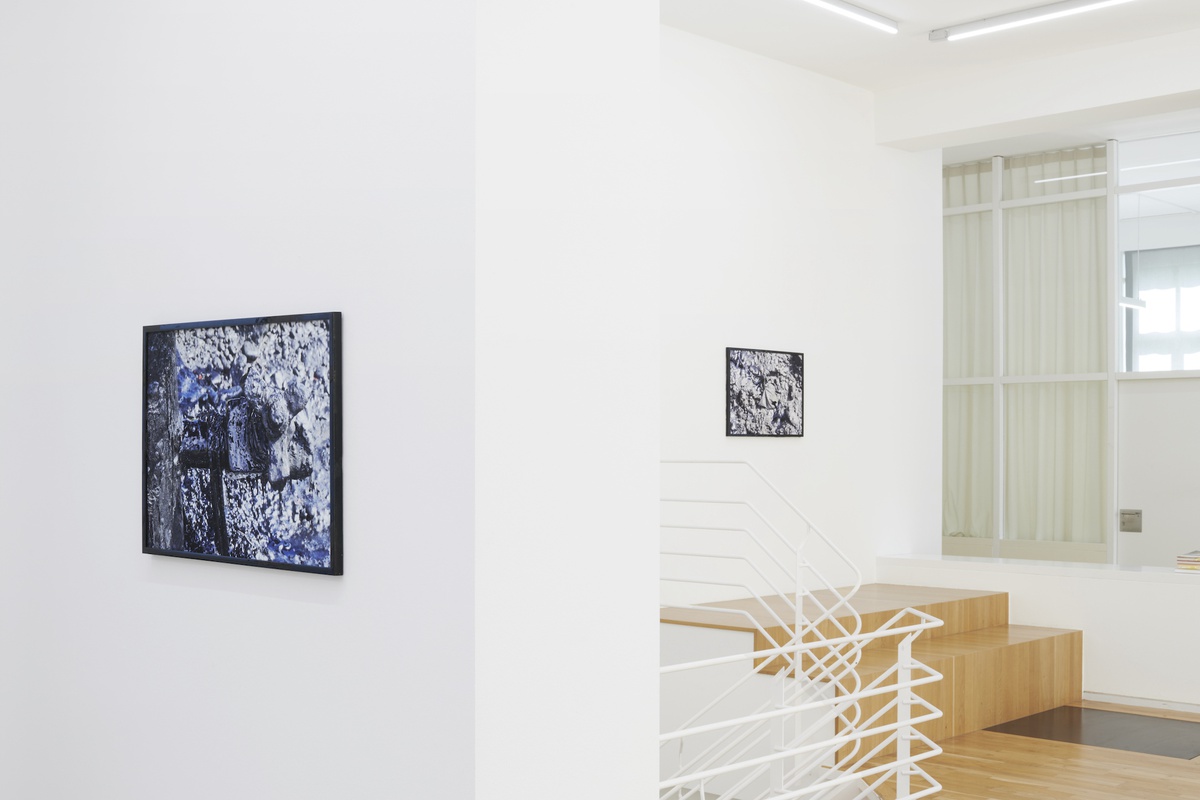 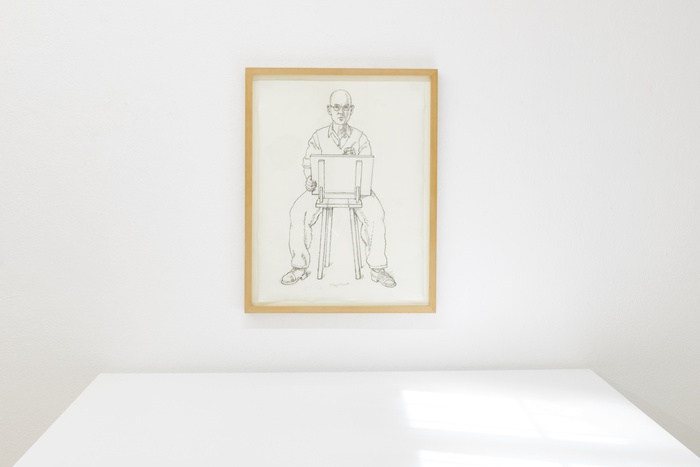 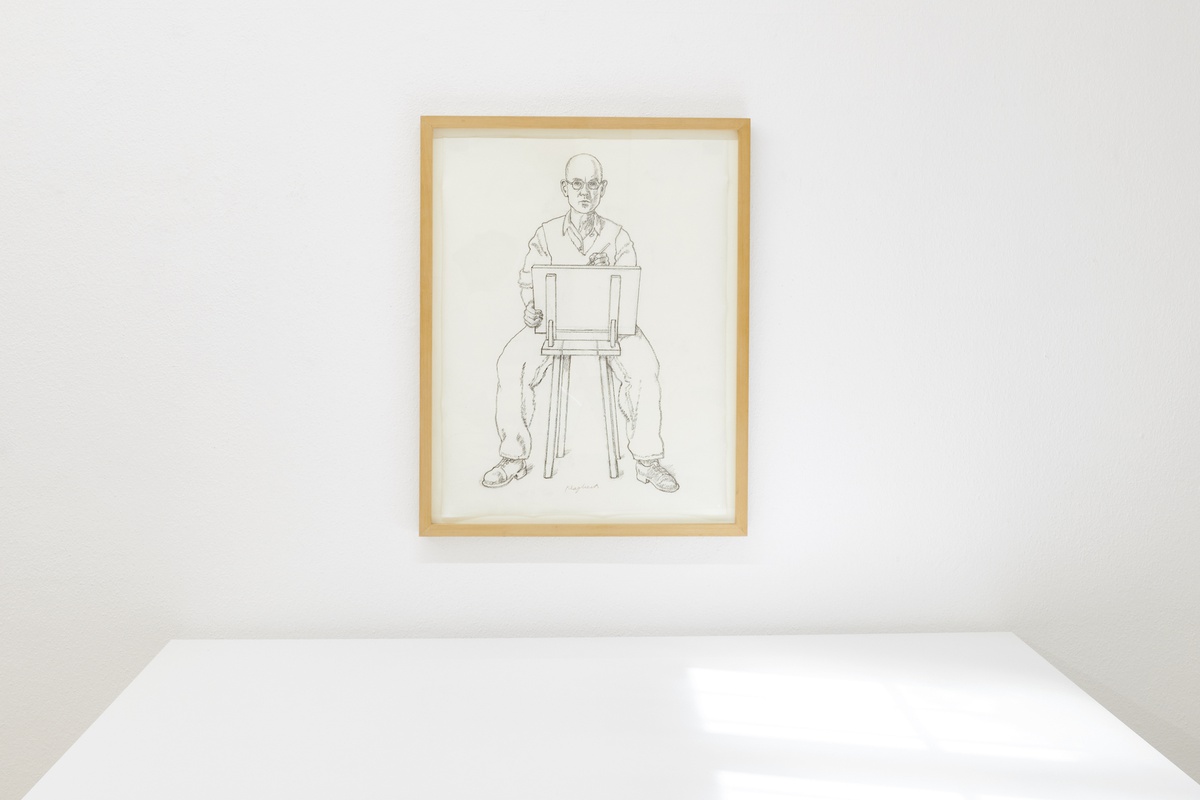 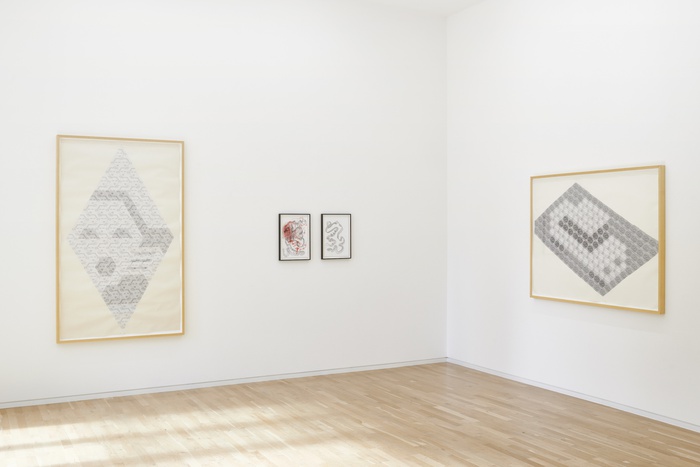 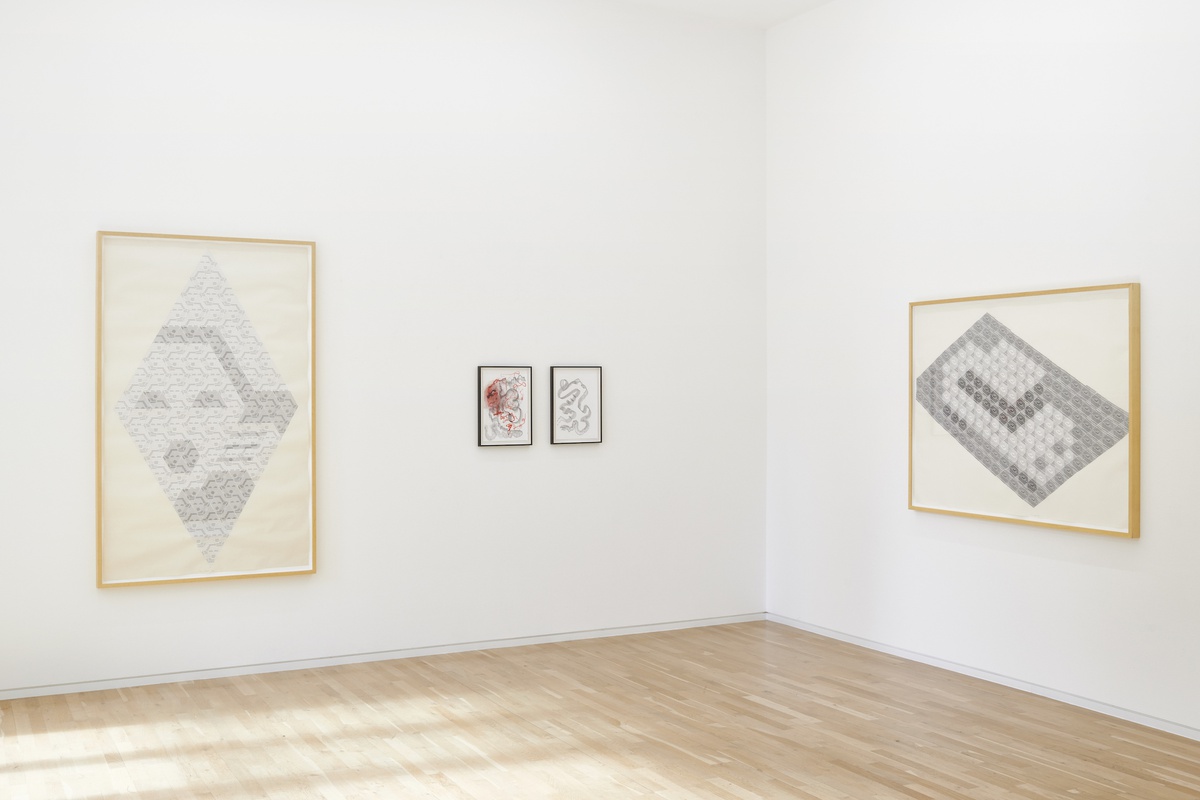 The exhibition project brings together works on paper by artists from the program of Jahn und Jahn in Munich and dépendance in Brussels. The exhibition was conceived as a collaborative project between the two galleries as part of Various Others in Munich.

Michaela Eichwald, b. 1967 in Gummersbach. 1987–1993 studies philosophy, history, art history and German philology in Cologne. In the 1990s she publishes her first texts and writes poetry, before she begins to negotiate "fundamental and inexhaustible problems of art" in her own visual works. Subsequently, she develops her characteristic formal language between abstraction and figuration, combining painting, collage, sculptural work and drawing, as well as unusual support materials and fabrics. In Eichwald's œuvre, subjective elements from everyday culture, art history and image theory collide. Since 2021 she holds a professorship at the Academy of Fine Arts Vienna. The artist lives and works in Berlin. Selected solo shows: Kunsthalle Basel (2021/22), Walker Art Center in Minneapolis (2020/21), Städtische Galerie im Lenbachhaus und Kunstbau Munich (2020/21), Kunstverein Schwerin (2018), Palais de Tokyo Paris (2014) and Neuer Aachener Kunstverein (2009).

Albert Oehlen, b. 1954 in Krefeld, 1977–1981 studies at the Academy of Fine Arts in Hamburg. 2000–2009 professorship at the Kunstakademie Düsseldorf, 2015 honorary doctorate from the School of the Art Institute of Chicago. Since the late 1980s, Oehlen has devoted himself to abstract painting, initially with the intention of pointing out the inadequacy of the medium. The technical variety of the painting process he has developed since then includes spraying, dripping, smudging, and smearing. In this way, he creates works that oscillate between structure and formlessness, depth and flatness, and a particular empathy for detail and destruction. Oehlen transforms and reinterprets painting; in doing so, he works against methods, paradigms and hierarchies. The artist lives and works in Gais AR in Switzerland. Selected solo shows: Sprengel Museum Hanover (2020), Kunstverein St. Gallen (2019), Cleveland Museum of Art (2016/17), Museum Guggenheim Bilbao (2016/17), Kunsthalle Zurich (2015), New Museum New York (2015), Museum Wiesbaden (2014), Museum Folkwang Essen (2014), Mumok Vienna (2013), Kunstmuseum Bonn (2012).

Lucie Stahl, b. 1977 in Berlin, 1999–2000 University of the Arts (UdK) Berlin, 2000–2001 Glasgow School of Art, 2001–2005 Städelschule in Frankfurt am Main. Since 2021 she holds a professorship at the Institute for Visual Arts and Cultural Studies at the University of Art Linz. In her photographic works, Stahl investigates phenomena such as environmental pollution and overproduction. Tshe foscuses on the production of material, in particular cycles for the extraction and the overexploitation of raw materials from the earth as an ecological form, characterized by organic instability and physical violence. The artist sees photography as an open discipline that "makes it possible to think conceptually about contemporary problematics and practices beyond strict genre boundaries." Stahl lives and works in Berlin. Selected solo shows: Kunstverein Bonn (2021), Queer Thoughts New York (2019), Freedman Fitzpatrick Paris (2019), Fri Art – Centre d’art de Fribourg (2018), dépendance Brussels (2017), Halle für Kunst Lüneburg (2016), Dallas Museum of Art (2016), Gio Marconi Milan (2013), Kölnischer Kunstverein in Cologne (2011), Kunstverein Nürnberg in Nuremberg (2009).

Konrad Klapheck, b. 1935 in Düsseldorf, 1954–1958 studies at the Düsseldorf Art Academy. His first painting of a typewriter was created in 1955. Influenced by artists such as Max Ernst and encouraged by René Magritte and the ideas of the Surrealist circle around André Breton, Klapheck developed his characteristic object painting. After an early recognition of his artistic work by the Förderpreis zum Großen Kunstpreis des Landes NRW in 1961, he subsequently and until today refuses all awards. From the 1970s on, his painting influenced the style of Hyperrealism. In 1968 and 1977 he participated in the Documenta in Kassel. From 1997 to 2002 Klapheck holds a professorship for free painting at the Düsseldorf Art Academy. From 1992 to 2002 he created portraits of colleagues and friends from the international art scene. They are all drawings mostly of whole figures, each with attributes. In 2010 he was appointed honorary member of the Kunstakademie Düsseldorf. Klapheck lives and works in Düsseldorf. Selected solo shows: Musée des beaux-arts de La Chaux-de-Fonds (2019/20), Museum Kunstpalast Düsseldorf (2013), Kunsthalle Recklinghausen (2006), Musée d’Art Moderne et Contemporain de Strasbourg (2005), Hamburger Kunsthalle (1985), Museum Boijmans Van Beuningen Rotterdam (1974), Kestner Gesellschaft Hanover (1966), Von der Heydt-Museum Wuppertal (1966), Palais des Beaux-Arts Brussels (1965).

Thomas Bayrle, b. 1937 in Berlin, 1956–1958 trained as a pattern draftsman and weaver, 1958–1961 studied commercial and print graphics at the Werkkunstschule Offenbach. In the 1960s he establishes himself as a publisher of artists' books, in some cases with illustrations created by himself. 1971 scholarship from the Villa Massimo in Rome. 1972–2002 professorship at the Städelschule in Frankfurt am Main. 1995 Visiting professor at Tohoku University in Japan. 1964, 1977 and 2012 participations in the Documenta in Kassel. 2012 Awarded the Arnold Bode Prize for outstanding contribution to contemporary art. He is one of the first German artists to produce computer-generated art. Bayrle uses the principle of the serial as an essential, aesthetic element of his visual work. Following Andy Warhol, Roy Lichtenstein and Sigmar Polke, his works reflect the world of consumer goods. With his multipliable and repeatable forms and pictograms, Bayrle refers to social developments and the basic principles of his work. The artist lives and works in Frankfurt am Main. Selected solo shows: Museum Folkwang Essen (2019), The New Museum in New York (2018), MAK – Museum für Angewandte Kunst in Vienna (2017), Städtische Galerie im Lenbachhaus und Kunstbau in Munich (2016), Museum Wiesbaden (2016), Contemporary Art Museum St. Louis in Missouri (2013), Madre – Museo d’arte Contemporanea Donna Regina in Naples (2013), Museum Ludwig Cologne (2008), MMK – Museum für Moderne Kunst in Frankfurt am Main (2006).