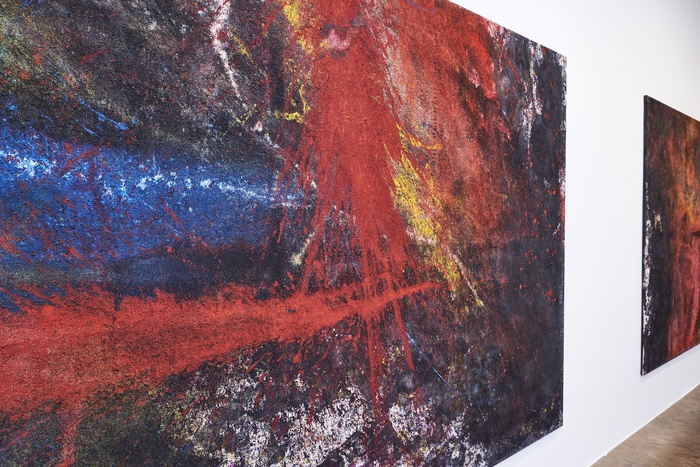 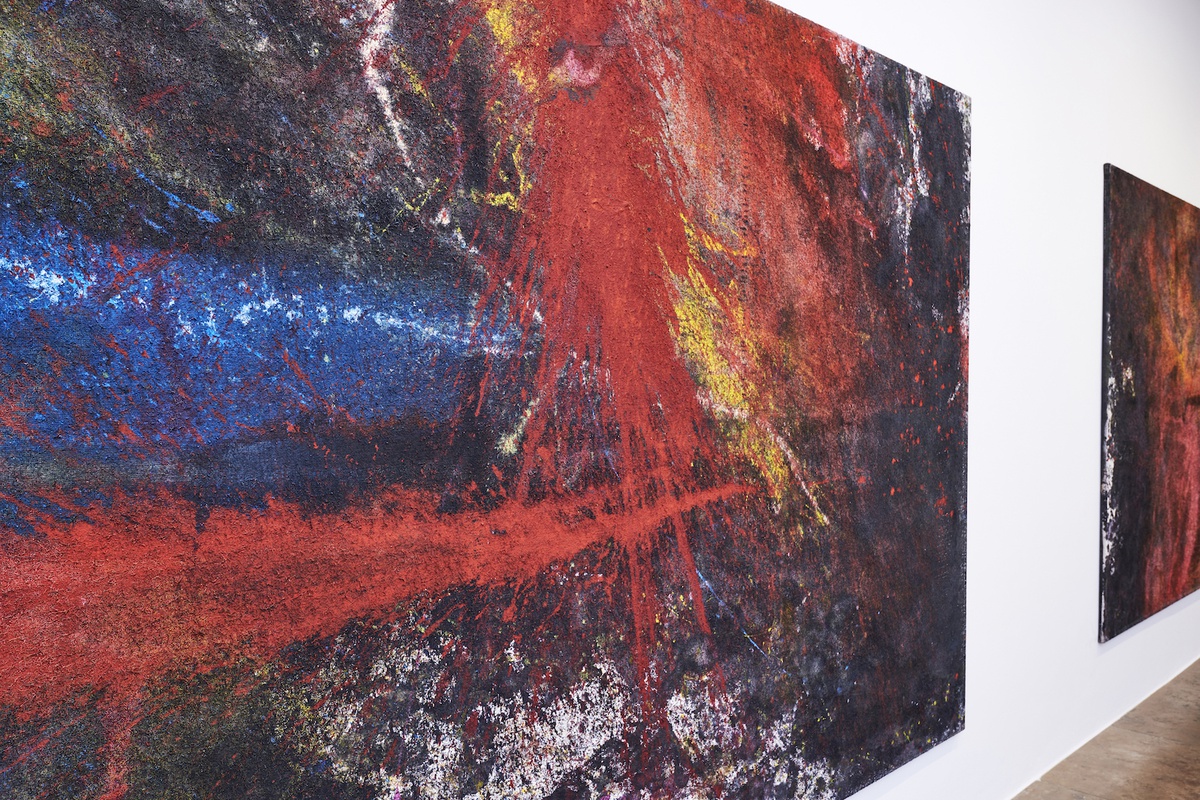 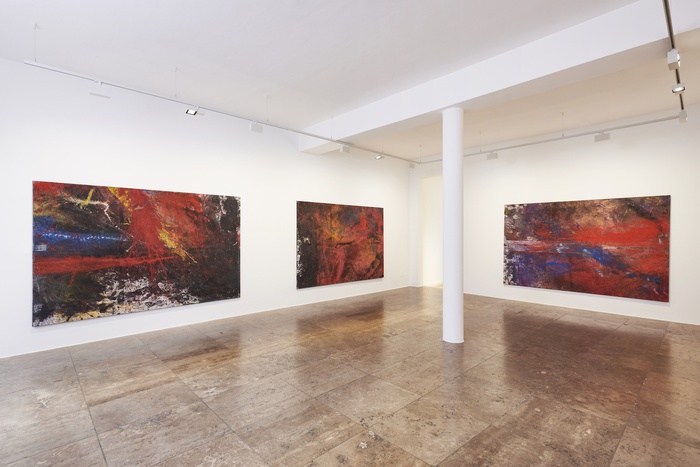 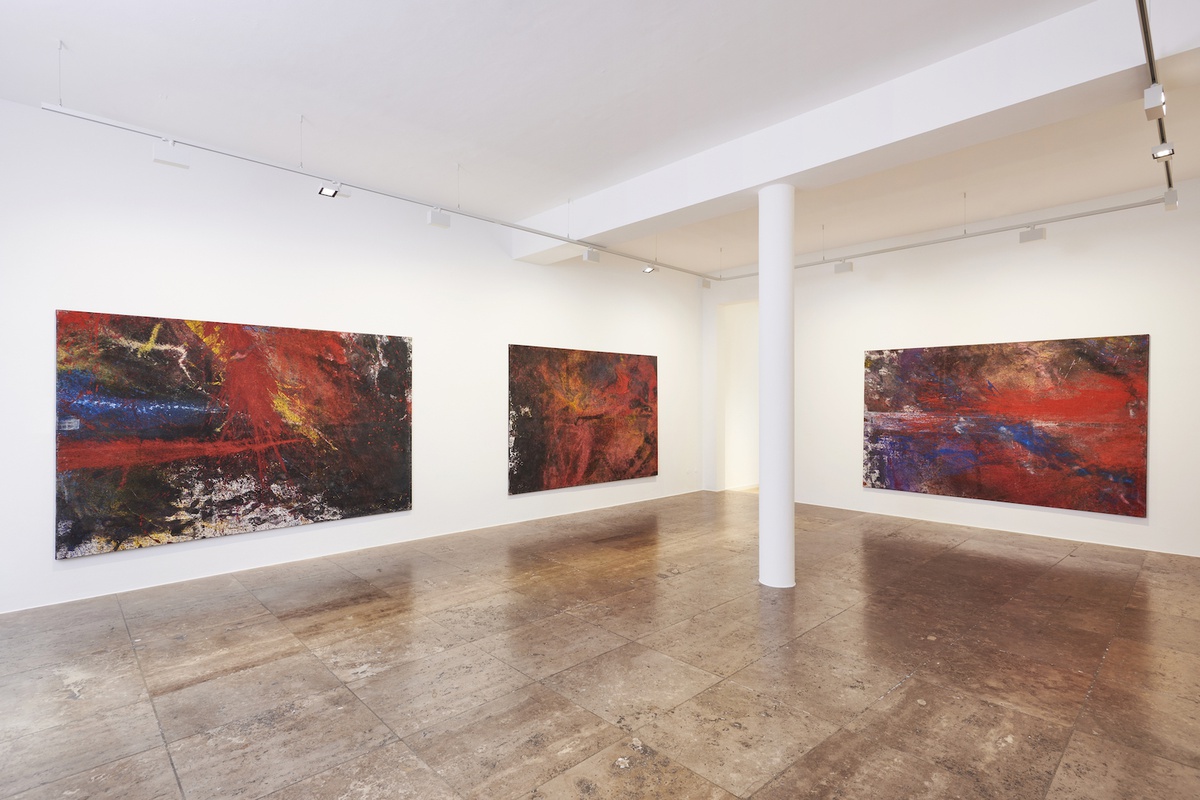 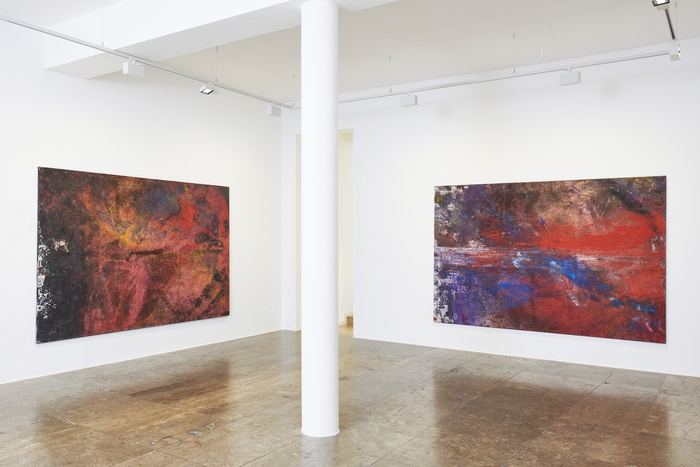 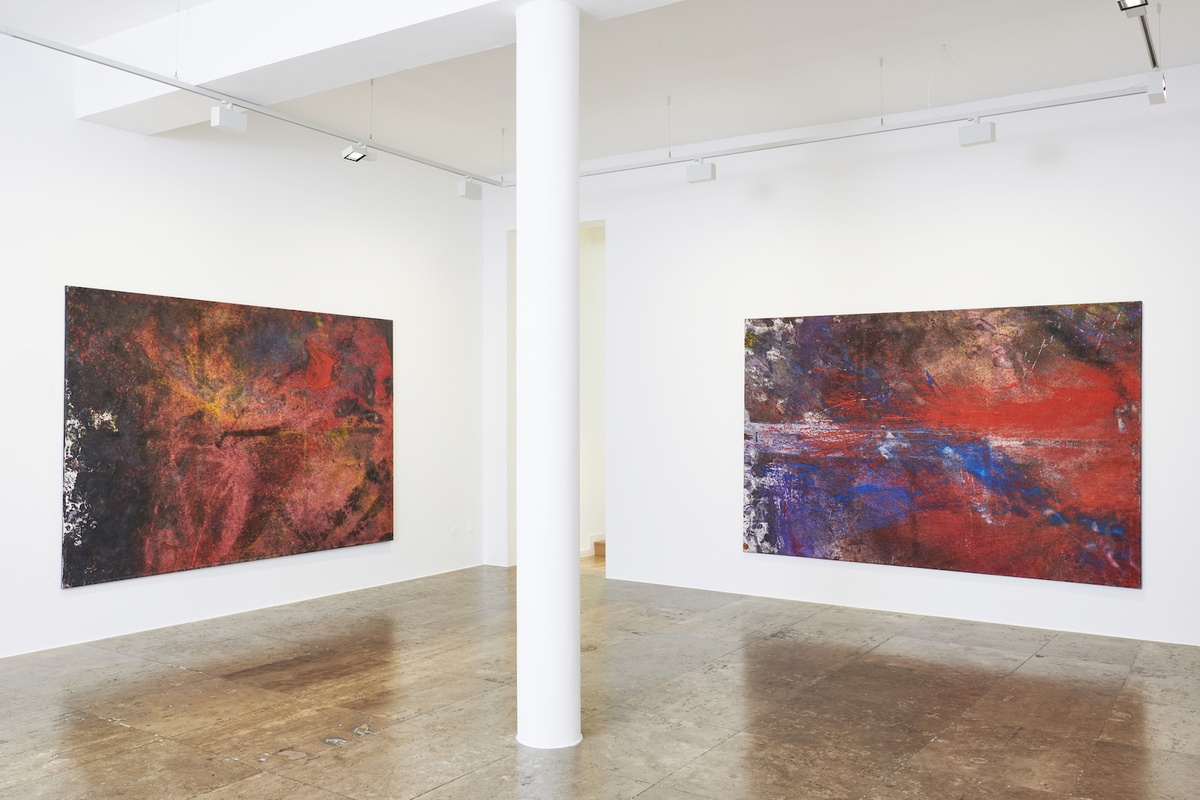 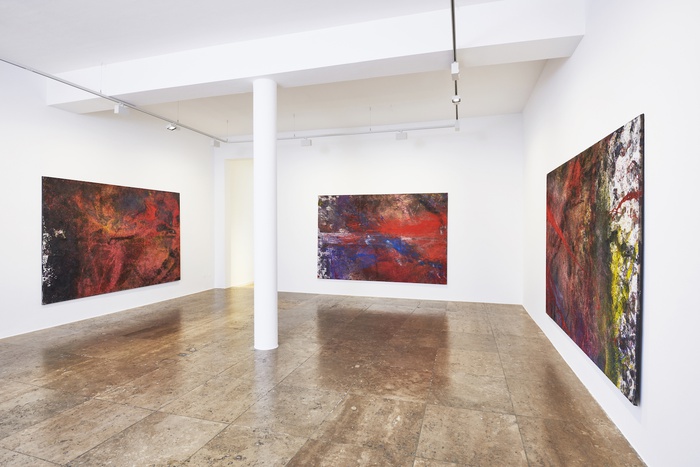 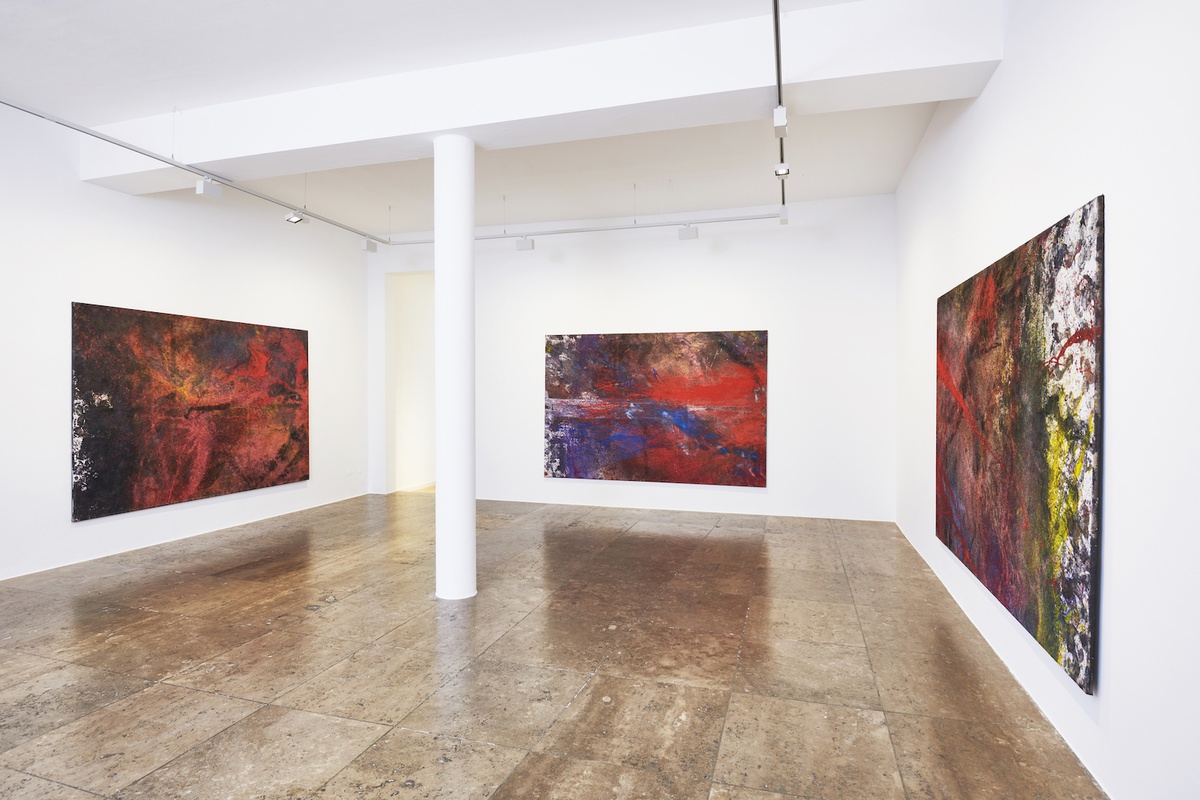 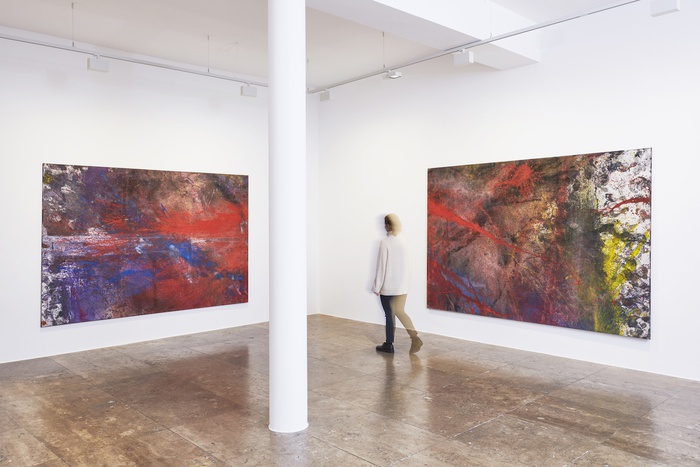 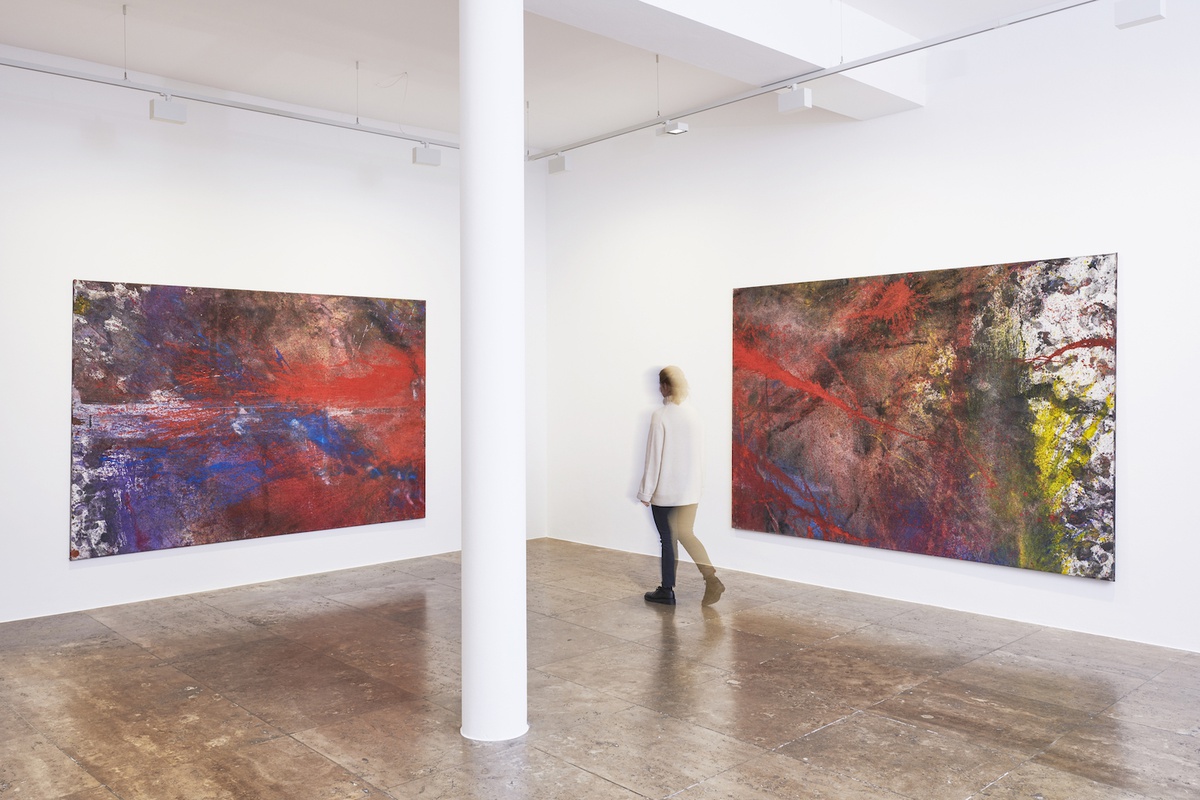 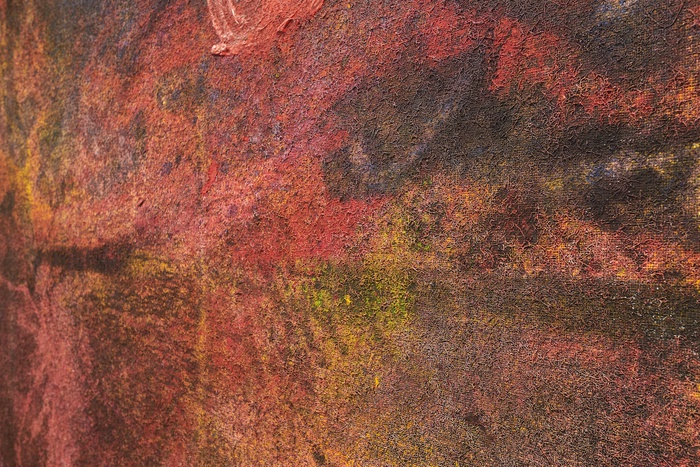 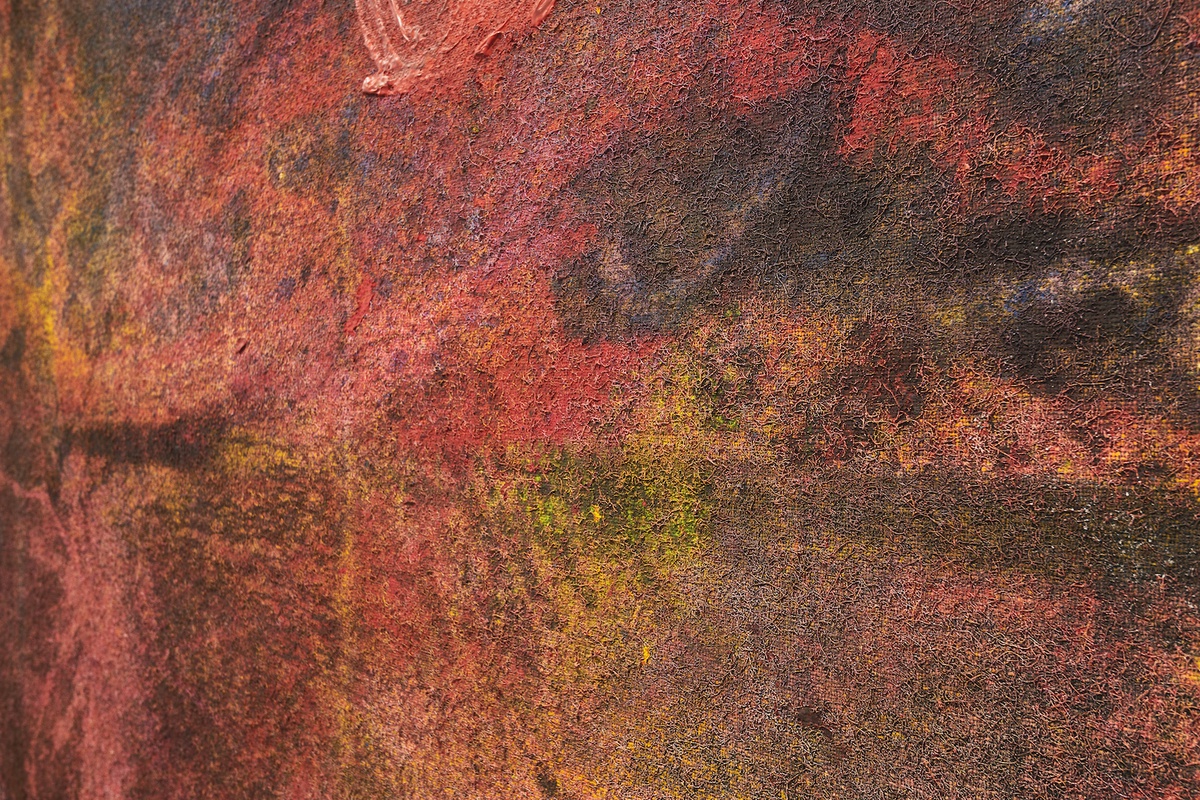 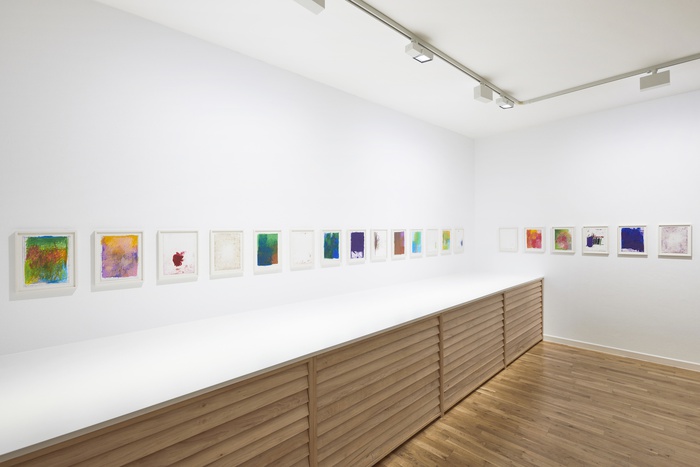 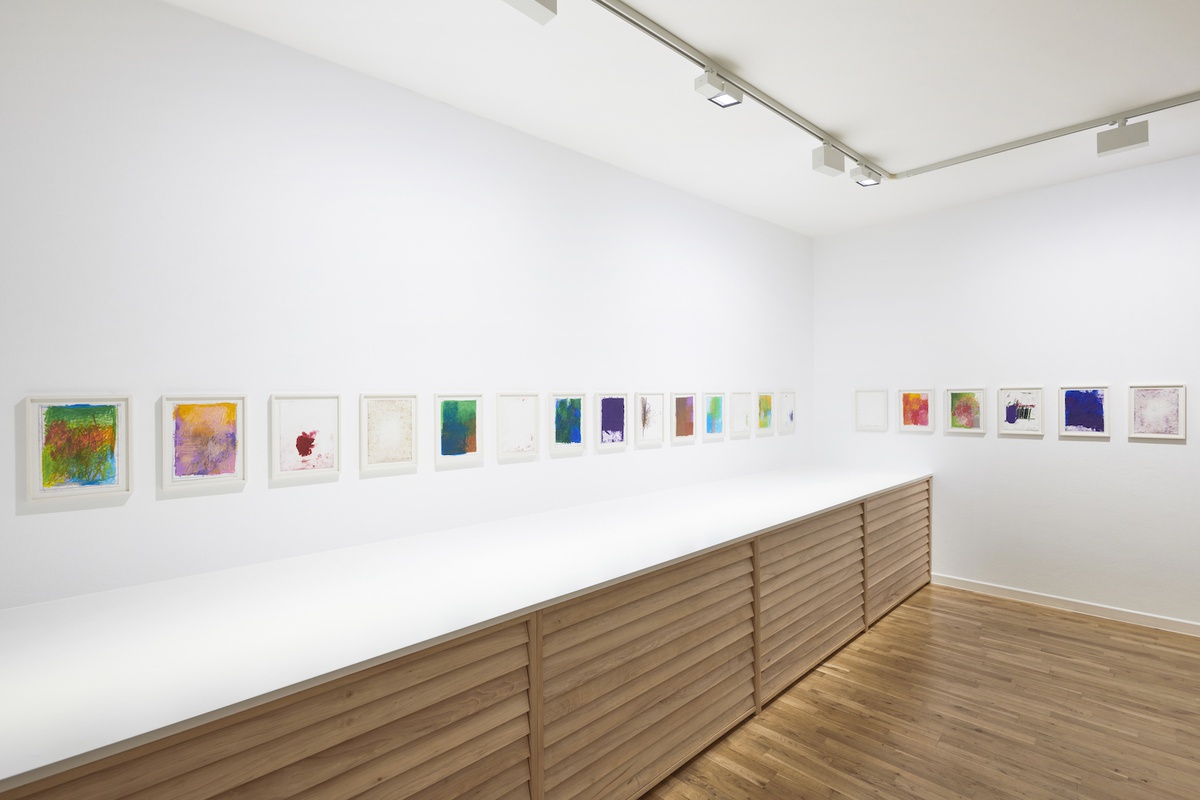 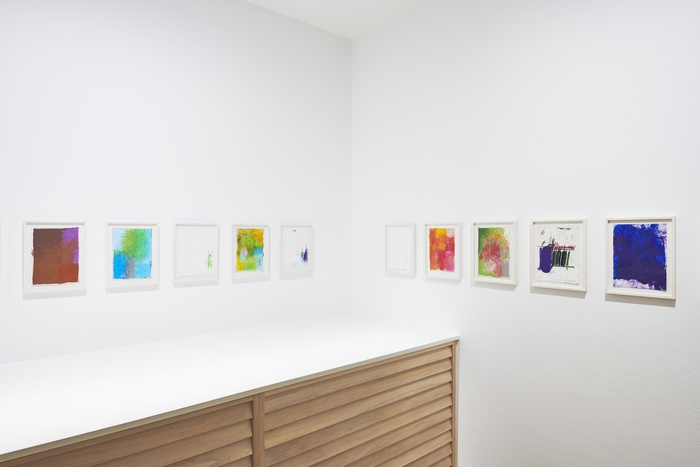 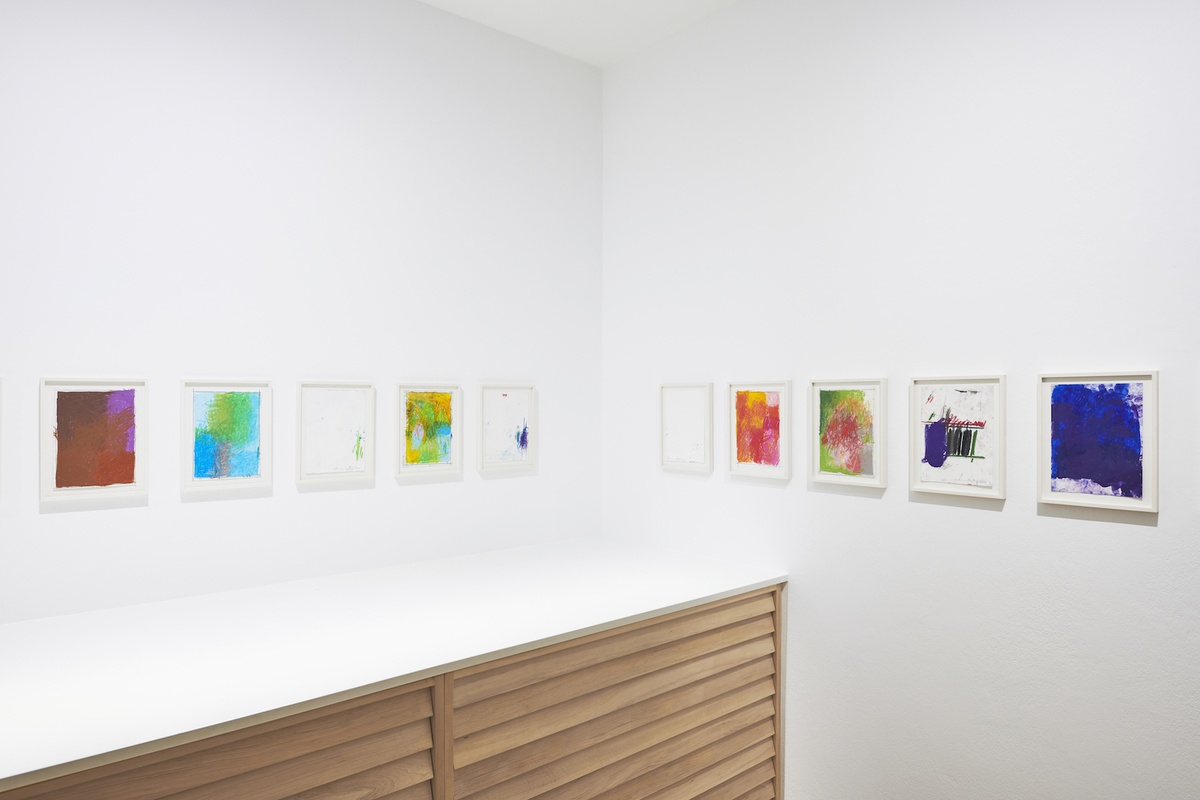 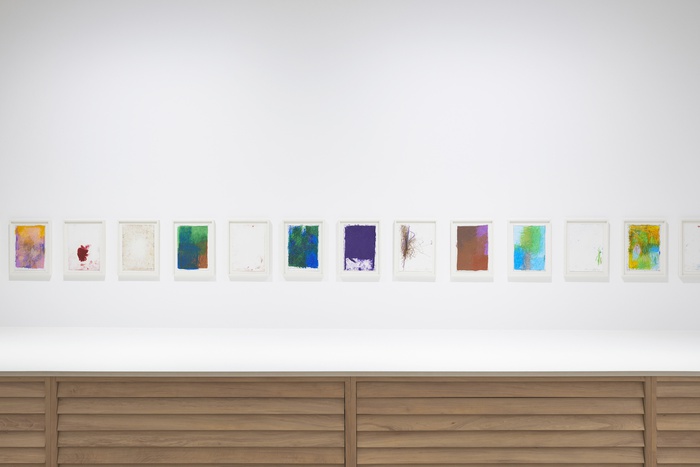 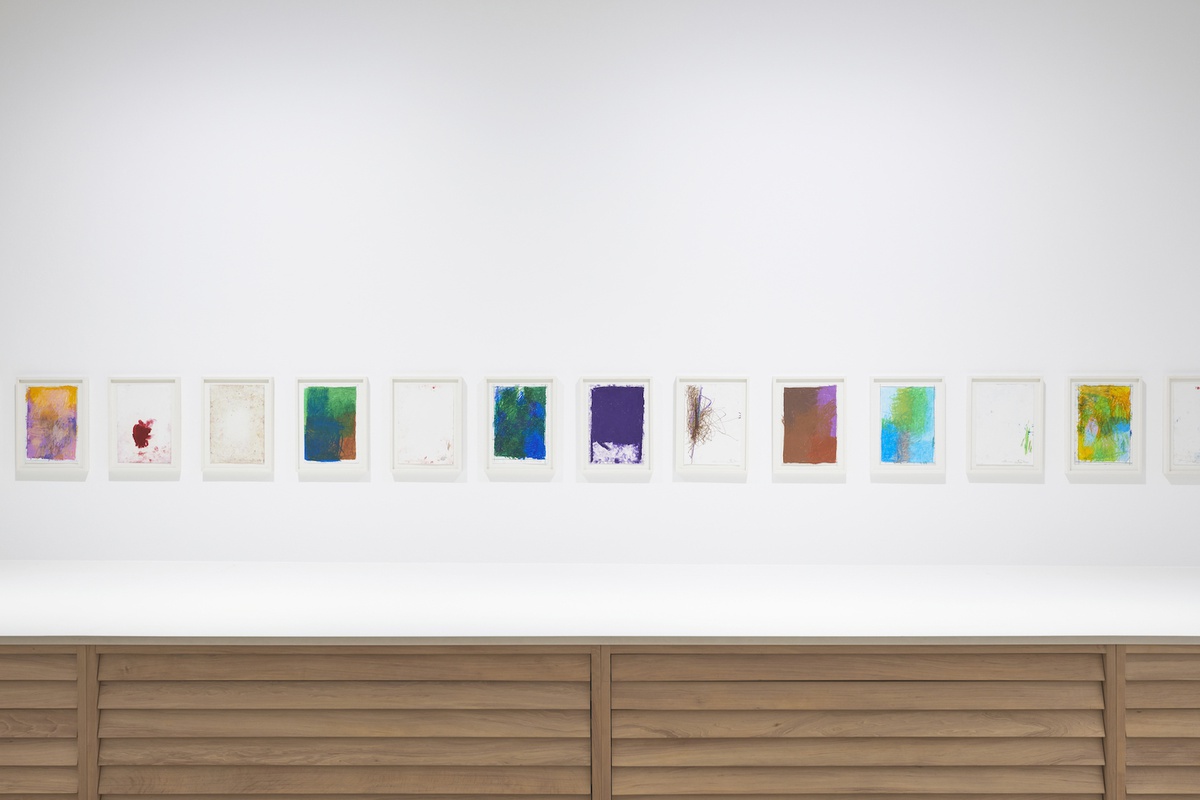 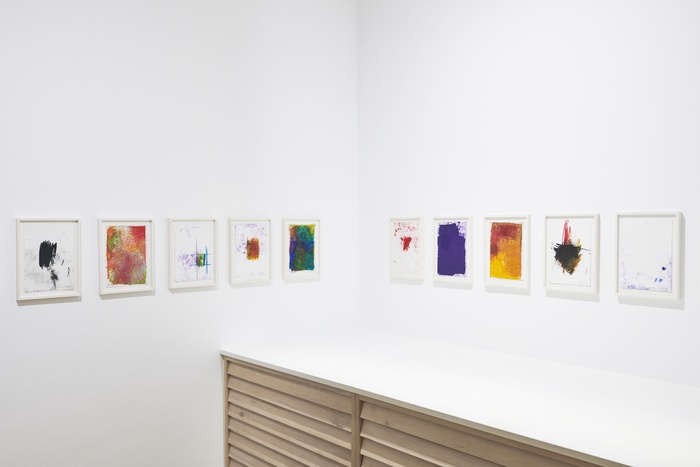 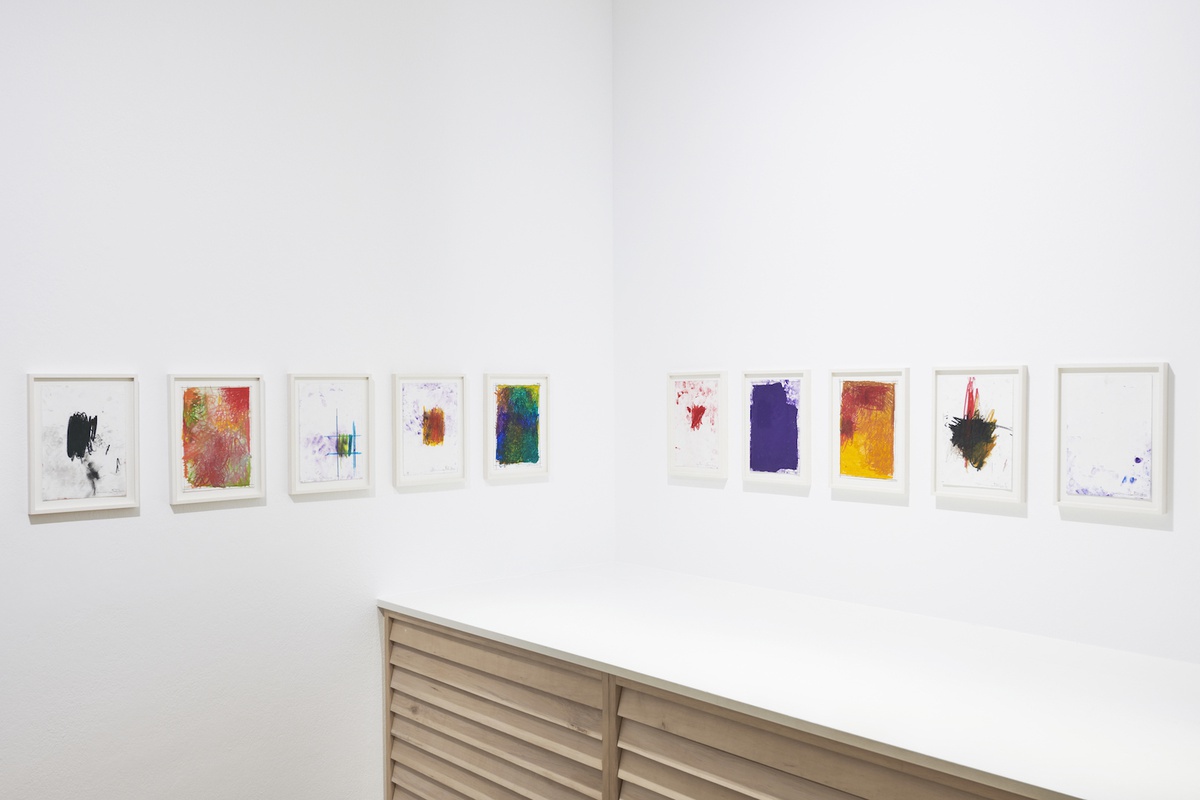 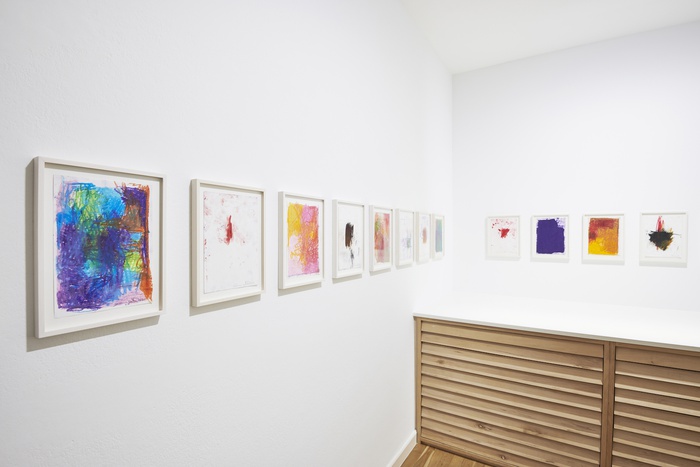 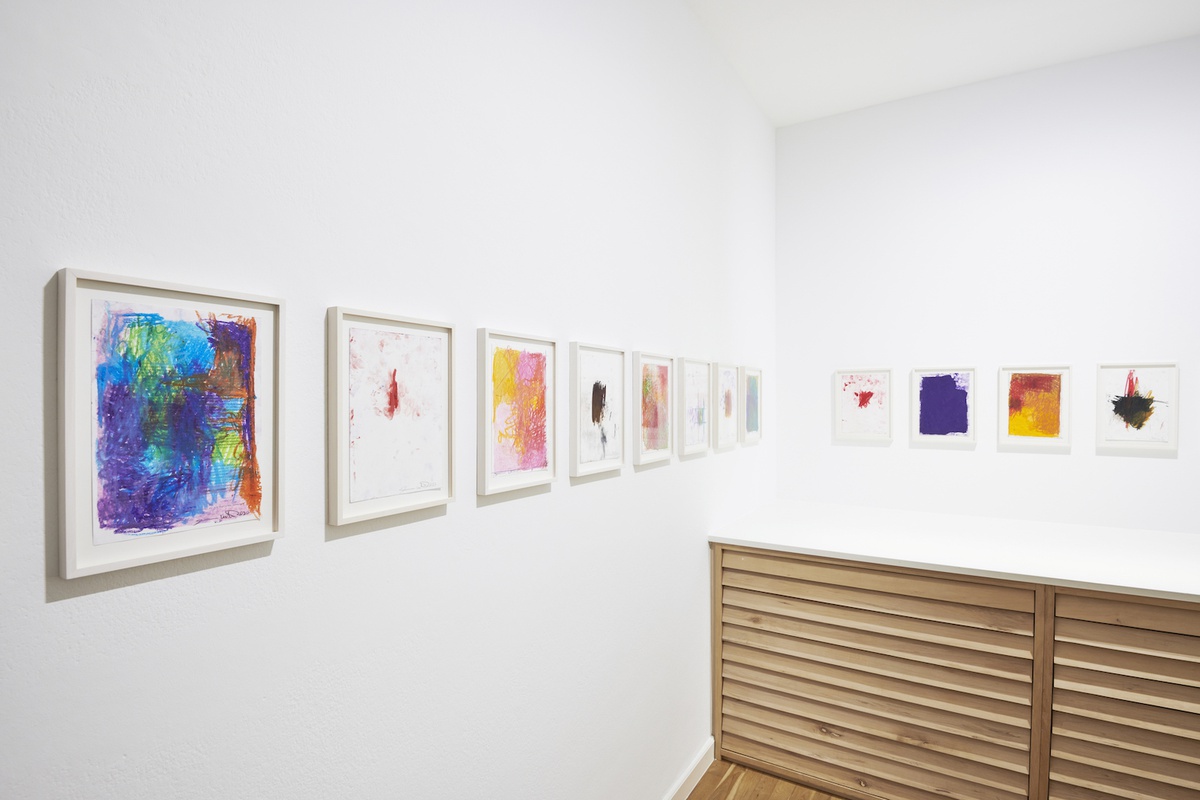 Nitsch himself defines painting as the “visual grammar of [his] theater on a pictorial surface” [2]. At this year's Bayreuth Festival, he staged Richard Wagner's "Walküre (Valkyrie)" with a painting action. His visual implementation of Wagnerian sounds resulted in an imposing color spectacle, which he realized with the help of ten painting assistants. They acted alongside opera singers on a stage lined with canvases and received precise instructions via microphones as to which colors should be spilled, splashed, or distributed when, how, and where. Some of the results can be seen in the current exhibition. In addition, Galerie Jahn und Jahn presents a further selection of "Schüttbilder" (poured paintings) that date from 2021 as well as from earlier years. Monochrome surfaces, impasto structures, and areas smeared by hand merge with fine splashes and dripping lines to form expressive compositions. Alongside red, dominant in Nitsch's painting – as a symbol for blood, flesh, fire, love or passion – for a long time, black is used, which is associated with death and mourning, among other things. Moreover, the works shown reflect a broad spectrum of colors, ranging from warm earth tones to cool blue tones to colorful combinations. Nitsch not only dealt with synesthetic relations and questions of color harmony, but also developed his own color theory.

The diversity that has emerged over the course of his artistic career is also impressively illustrated by his current drawings, which are arranged as a frieze in the gallery. Nitsch describes this as follows: “my scribbling tries to penetrate deep into being, into the groundless (without beginning and end), into the fundamental excess. a total, extensive automatism is applied. the situation of the drives of the unconscious expresses its quakes and shudders through gestures [sic]” [3].

Both the invisible and hidden, existing beneath the surface, function as the setting for the architecture of the Orgies Mysteries Theater: selected pieces from the 1980s complete the works shown in the exhibition. The connection of human intestines and organs with architectural elements, on the one hand, refers to the unfathomable layers of depth psychology, and, on the other hand, to the underground location of the play, which includes a system of intricate corridors and vaults at Prinzendorf Castle. In close collaboration with Fred Jahn and the printer Karl Imhof, a collection of more than 3,300 individual prints was created in an elaborate printing process between 1984 and 1991 (published by Verlag Fred Jahn).

Hermann Nitsch (born 1938 in Vienna, lives and works in Prinzendorf) began with his first painting action in 1961 and since the late 1960s has realized countless exhibitions, performances, and concerts around the world. Museums in both Mistelbach and Naples are dedicated to this important pioneer of Viennese Actionism, who also taught at the Städelschule in Frankfurt from 1971 to 2003. The 160th action at Prinzendorf Castle is planned for 2022.